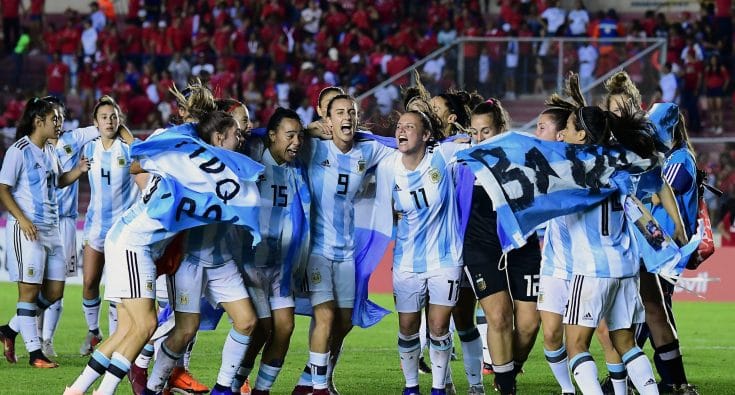 With the most prestigious friendly tournament in women’s soccer in full swing, international competition is gearing up to get underway. Last year’s She Believes Cup brought all the passion and firepower that the United States soccer world harbors. With Japan dropping out due to the COVID-19 pandemic, Argentina, a team that has not scheduled fixtures since 2019, has been called in to replace the Asian superpowers.

Estefanía Banini, Ruth Bravo, and Flor Bonsegundo, among others, would have been players to look out for in the sixth edition of the She Believes Cup. Surprisingly for many, they have not been named in the squad since the World Cup in France two summers ago. With appearances in America’s NWSL, Spain’s Primera División, and France’s Division 1, there is no shortage of talent to choose from. The Argentine Football Association (AFA) has disregarded its women’s sides throughout the decade. This climaxed in the inactivity of the Argentinian women’s soccer team following their unsuccessful qualifying campaign for the 2015 World Cup. Although the terrors of the AFA rage on, players are hopeful for change. The feminist movement within Argentina has allowed forward steps to be taken, even as players continue to fight for basic rights, scheduling consistency, and professionalism in the coming seasons.

Qualifying for the World’s Biggest Stage 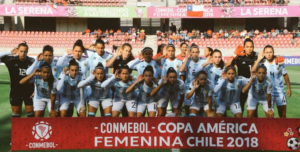 Historically, the entire world knows the name of Argentina’s legends. The blue and white stripes have graced the banners of World Cup winning parades twice, with Diego Maradona and Lionel Messi revered as the world’s best. In 1971, the women looked to start a history that would build on its successors through an unofficial World Cup. Hope for the Argentinians continued to build as a league was founded in the 1990s. Unfortunately, due to lack of funding and ingrained societal standards, the league, known as the Primera División A, had largely gone unnoticed prior to the past few years. Although this is accredited by many to CONMEBOL’s decision to enforce clubs to fund a women’s side, a war has been raging on a much larger scale.

In 2015, shock beheld the women’s Argentinian national team as the AFA dismissed head coach, Carlos Borrello, with no replacement. The players were tired. Argentina had endured years with a man who had outstayed his welcome, and surrounding countries were starting to develop and professionalize their leagues. As the 2018 men’s World Cup in Russia drew nearer, the anguish pressed on. The Argentinian women’s national team went on strike after returning to an unchanged environment. The team refused to play under the AFA until the federation provided a minimum salary of $8.50 and regularly scheduled matches. This led to the team publishing a public letter to solidify their intention. The sister squad to one of the world’s best were sleeping on buses to round-trip games without receiving payment.

While the women’s soccer side of the AFA lay in shambles, both the players and the public were taking part in a greater revolution. In 2015, a march was held in Buenos Aires to call precedence to the brutal and violent actions against women. As the Women’s World Cup in Canada was brought to a close, the Argentinian movement entitled Ni Una Menos (Not One Less) was making waves throughout the Americas. Now spreading beyond issues of abuse against women, other subjects were thrusted into the spotlight. Gender pay gaps, mental health, and reproductive rights among others were broadcasted on media outlets. New findings showed the movement to catalyze positive repercussions as increased protection for women scaled the walls built by a greater economic crisis. Poverty rates would decrease. Jobs would be created. Women would find themselves at the forefront of a world where they felt empowered to become leaders. As Macarena Sánchez exemplifies, a pioneering spirit in the face of indifference makes dreams into a reality. 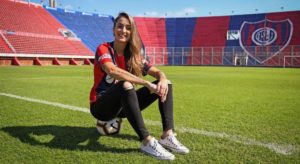 On January 5th, 2019, Macarena Sánchez received the unexpected call that she had been released from her club. Sánchez signed for UAI Urquiza in 2012, the best team in the country. In her time with the Buenos Aires superpowers Sánchez won the league three times, concurrently qualifying to play in the reputable Copa Libertadores. However, the realities of life as a female athlete in Argentina are far less glamorous. Sánchez worked an administrative job with Urquiza to compensate for the salary of a miniscule 400 Argentine Pesos ($11) per month. Throughout her seven years with the club, Sánchez poured her talents and willpower into a dream largely unheard of for Argentinian women. After that call, Sánchez was left unemployed and unpaid without consultation or adequate reasoning. Furthermore, Sánchez would not be permitted to join another club until the following season due to a league regulation. Nevertheless, the dream of the empowered Argentinian was not to be dissuaded.

After discussing the matter with her sister, a legal attorney, Sánchez knew that she had to take a stand. For her, it was never about the individual battle. Sánchez aimed to see a world where a girl could dream of becoming a professional footballer. As expected, UAI Urquiza and the AFA failed to respond. The reaction by the AFA was not a novelty. By comparison to other teams in the Primera División A, Urquiza was one of the best. Basic needs were unprovided on a weekly basis for other teams. The notable absence of training cloths, nutrition, and medical support would be unheard of for the top men’s league in a soccer dominated culture.

Despite the lack of acknowledgement, FIFpro helped the 27 year old activist blaze ahead in her fight for equality. FIFpro stated to AP News that “It’s unacceptable for soccer clubs and national soccer federations in South America, or anywhere else, to treat women players as second-class citizens with vastly inferior conditions to male players” (Henao, 2019). These statements, along with the support of female players in teams throughout the country, forced the AFA to eventually cave.

Another huge proponent for the development of women’s soccer in Argentina were the citizens themselves. As the Ni Una Menos movement climbed ever higher, supporters from all across the nation shed light on Macarena Sánchez. Politicians, artists, and ex-footballers rallied their support for the battle against sexism in soccer. Now, each team in the Primera División A has at least eight contracted players. For reference, Sánchez’s current club, San Lorenzo, has a whopping 23. In addition, the top-flight clubs are finally recognized as professional. Claudio Tapia, the president of the Women’s Football Commission of the AFA, signed an agreement before the World Cup in 2019 confirming this fact. Although the mindsets of many have changed, Macarena Sánchez is the first to remind onlookers that the fight for equality is nowhere near over.

Feminist Football and the World Cup 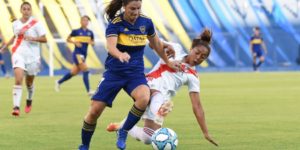 As Argentina took the stage at the Women’s World Cup in 2019, all prior doubts about the team’s talents were abolished. A group that had battled their way back into existence less than two years earlier were in competition with the best in the world. After taking their first World Cup point against Japan and clenching a historic 3-3 tie against Scotland, Argentina looked to be on the up. In many ways, they were. Players were starting to sign with top European sides and the league itself gained more widespread attention. Argentina were ready to enter the Pan American Games a few weeks later with renewed spirit and a fiery will. But as team captain Estefanía Banini describes to clarin.com, passion can only take a team so far when management is not at the same level.

Throughout the time succeeding the strike in 2017, struggles of continued professionalism and respect towards the players has been dismal. During the World Cup, GPS tracking devices were unable to be properly implemented and paper schedules were handed out in place of email. In addition, female specific issues such as menstruation were thought of as trivial and went unacknowledged by the coaches and medical staff. By the She Believes Cup this year, it has been close to a year and a half since Argentina have played their World Cup heroes. Estefanía Banini, Flor Bonsegundo, and Ruth Bravo among others have been left off the roster due to asking for better conditions. It is unreasonable to expect more from the AFA? The answer to most is obvious: absolutely not.

The Primera División A, now a professional league, deserves a federation that treats them as more than women playing for recreation. The starting point was from the ground up. As the Ni Una Menos movement rages on, new developments within Argentina’s government are pushing forward everyday. Banners reading the words “fútbol feminista” is the new expectation for the AFA to meet, and rightly so. Women’s soccer is not just a game that can be labeled as such any longer. Women’s soccer is a part of something greater. The sport that holds a place within the heart and soul of Argentina’s people has become intertwined with the desire for a reformation in today’s modernized world. Those who press forward to change their society allow it to become their identity, alongside Argentina’s beautiful game. Feminist soccer is having a revolution in Argentina, and its time the players reap the rewards of a developing system.