Game Recap: It’s hard to forget the 2019 Women’s World Cup final in Lyon, France. Between the records smashed and the domination of the USA, this unarguably, was the most successful tournament the sport of soccer has ever had. The final started off in exciting fashion, with Sari van Veenendaal coming to the rescue once again for the Dutch, being credited for three major saves in the first half alone. Finally, Megan Rapinoe broke the deadlock with a converted penalty kick off of an obvious foul from Dutch defender Stefanie van der Gragt. Rose Lavelle then sealed the win with an excellent play started off by Crystal Dunn ten minutes later. Overall, the better team won, no disagreement. What we don’t know however, is if the Dutch could have challenged these four-starred powerhouses even more than they already did. 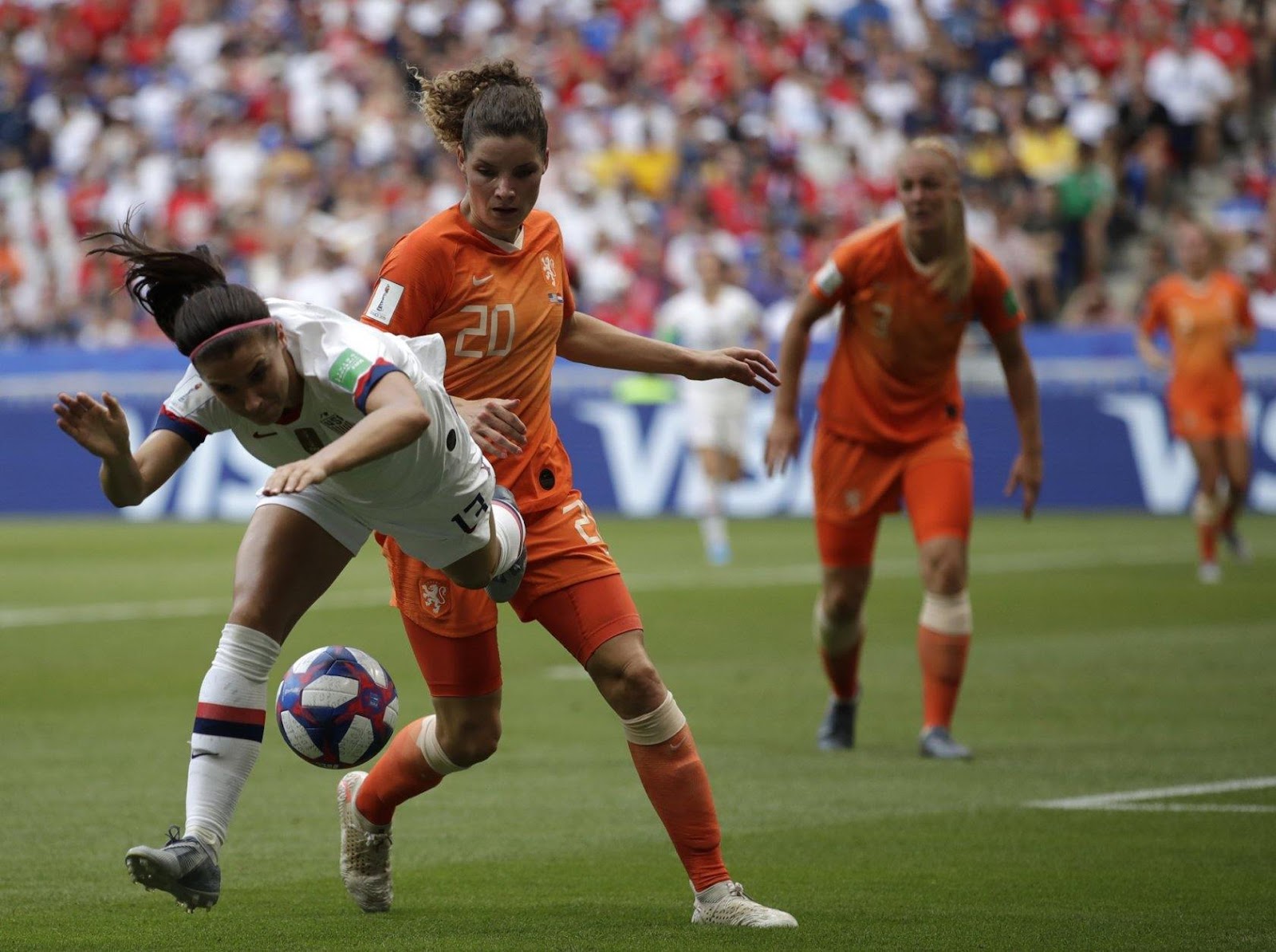 This might sound crazy, but putting Dominique Bloodworth in Sherida Spitse’s position would have saved the Dutch a lot of runs in behind the back and given them more defensive security. Number one, Bloodworth had not played left back in what feels like years at this point for her club side, or on a national stage (let alone a World Cup final). She struggled with her defensive positioning against Tobin Heath, and pressed up too high or towards the middle a lot of the time. This left the two center backs shifting over to cover her, and many gaps for crossing or cutting the ball back for the USA. To fix this, putting another player in her place such as Merel van Dongen or Kika van Es might have been able to control these issues better. Number two, Bloodworth is an excellent midfielder. If you have watched Bloodworth for her recent club sides such as Arsenal or VfL Wolfsburg, she is amazing as a defensive mid and is excellent at set pieces! Her free kicks this season for Wolfsburg show that. Bloodworth has been playing in a competitive club side and league for many years and is extremely successful in terms of maintaining the runs up the middle and distributing the ball. This does however mean that the Dutch would have lost Spitse in that crucial defensive midfield role, but if Bloodworth sat right above the defense to have made it almost a five back, the balls behind their defensive line would not have happened as often. If things really had not worked out, Spitse could have always come in for either Bloodworth, or Jackie Groenen could have been taken out to leave two defensive midfielders.

In terms of the United States penetrating the back four, options were usually created out wide by Rapinoe and Heath, or overlapping runs through the middle in between gaps in the Dutch defence. Out wide, this was a result of wings pushing up too far which could have been solved by taking out Spitse, and putting Bloodworth in an offensive center back position so the wings could push up and have teammates who covered in behind them. In the center, this almost five back system would have resulted in something similar to how the USA operates once they are ready to sit back and maintain possession. It keeps runs from being made through the middle, which was a big issue in namely the goal scored by Lavelle. 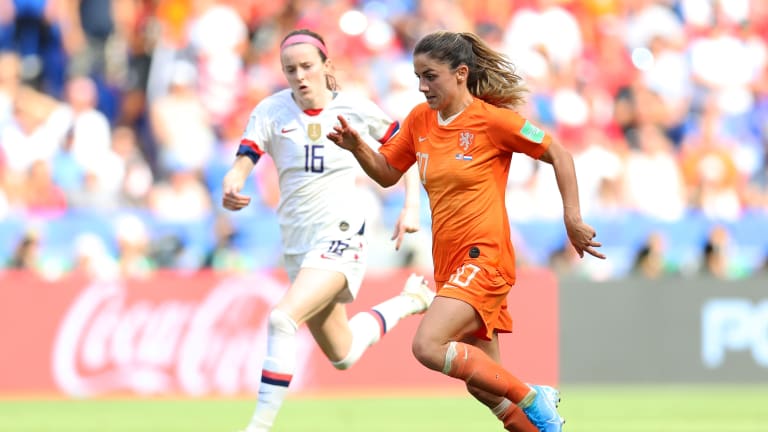 For this formation, it would be wise to put Daniellë van de Donk and Jackie Groenen as double offensive midfielders. This way, they could have obtained a lot of defensive soundness and on the attacking side, a lot of runs in and around Miedema. Defensively, if the ball was played to one of the USA wingers, they could have dropped back to help out the outside back defend the ball, or cover them when the fullback was stuck upfield. This also could have provided options for the outside backs to continue to push up farther. Since Julie Ertz is the heart and soul of the United States side, putting two attacking midfielders who can also make runs and stop attacks both offensively and defensively, would have made her job slightly harder than defending Vivianne Miedema who was playing as an offensive midfielder. Both Groenen and Van de Donk have a high level of defensive skill (especially Van de Donk) which would have made them perfect for this job (unlike Miedema).

It was not the best idea to put van de Donk wide, as she does not possess the pace and could have been better suited as someone who could drift wide as needed. The only issue found with this idea is the fact that it would leave a larger midfield gap, though this, if carefully monitored, could have been solved by one or both of the attacking midfielders dropping back when the Dutch did not have the ball. The hope was that with the formation of the front three, this would not have been as much of an issue when attacking.

As we know, Ertz did an excellent job of keeping Miedema from having a lot of danger with the ball. She sat back, forcing Miedema to go hunting for the ball and set up plays from farther away. If two offensive midfielders could have gone with Miedema up top, and made runs in and around Miedema, it would have made Ertz’s job a lot harder and allowed Oranjelwinnen to break down and exploit the USA’s defense.

The Front Three With Miedema Front and Center 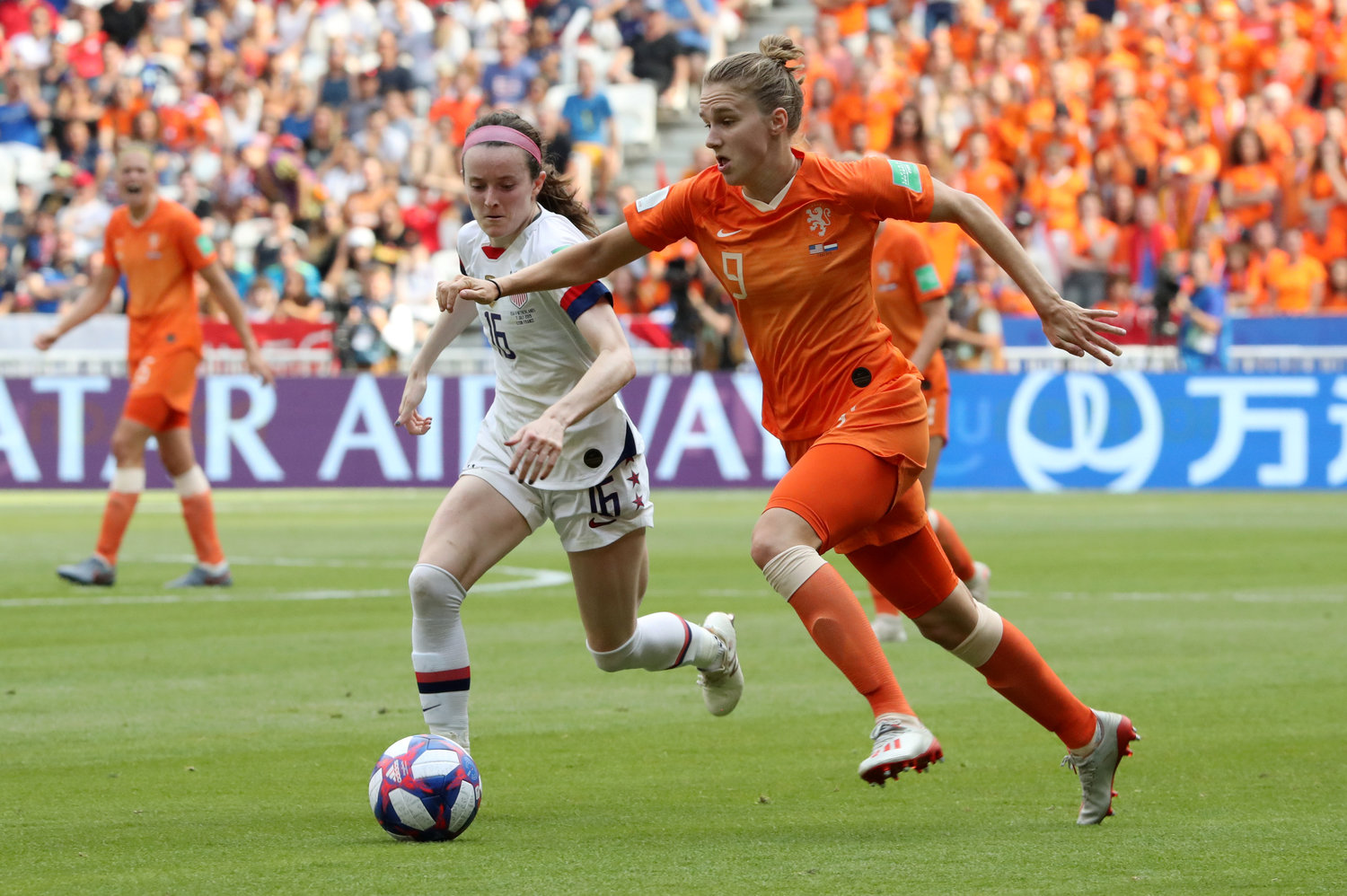 Let’s face it, Vivianne Miedema should have been playing number nine at all times throughout the World Cup as one of the best strikers in the world. It would have been excellent to test this USA defense with Miedema’s clinical finish and distributions in playing her midfielders. As much as she has excellent passing abilities and prefers to play attacking mid, if Miedema was not even played up top, it gave the USA all the room in the world to knock the ball around a bit. If Miedema had been allowed to do whatever she wanted, whether it be dropping back to receive passes, or staying higher to get the cross, the number of chances on net for the Dutch would have been a lot higher. This is what allowed her to score 6 goals and get 4 assists in one game at Arsenal.

For the wings, serious pace would have been needed to get past Dunn and Kelley O’Hara, and with Lieke Martens basically injured, starting both Shanice van de Sanden and Lineth Beerensteyn would have been the best option. They are both insanely fast and strong, and could have provided the crosses that Miedema could have capitalized on. The only chances the Dutch had throughout the game were by Miedema, so why not have let her near the goal? Ball distribution from both Groenen and Van de Donk would have also been critical in hurting the USA’s weak spots within their defense.