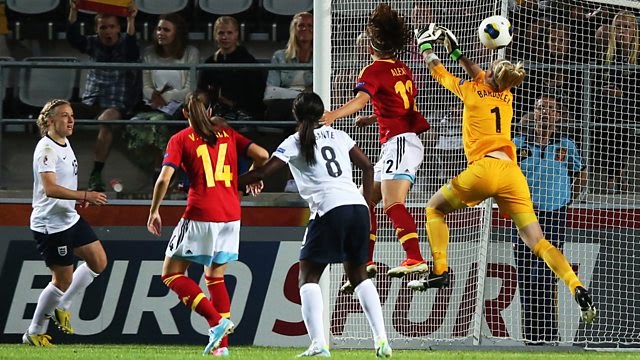 2013 was a while ago in the world of women’s sports. This game happened a full two years before the record breaking Women’s World Cup in 2015, and a full six before many of these players would be viewed by millions across the globe in the World Cup this past summer. In the smaller city of Linköping, Sweden however, one of the most entertaining matches ever seen in soccer was taking place. After an exciting first ten minutes with two goals on opposite ends of the field from star forwards Verónica Boquete and Eni Aluko, England and Spain were tied 1-1 going into halftime. The deadlock continued throughout the entirety of the second half, up until  Tyresö player Jenni Hermoso scored from a rebounded corner kick. England equalized a few minutes later from similar circumstances after Spain conceded off of a corner kick just before the 90 minute mark. All was to be won for both sides, who desperately wanted to advance beyond the group stage with France having already won their match earlier in the day. The moment of the match came from an unlikely source. Nineteen year old Alexia Putellas who had cancelled her summer plans after getting a surprise call to attend the tournament, forced the keeper to head the ball into her own net right before the final whistle. 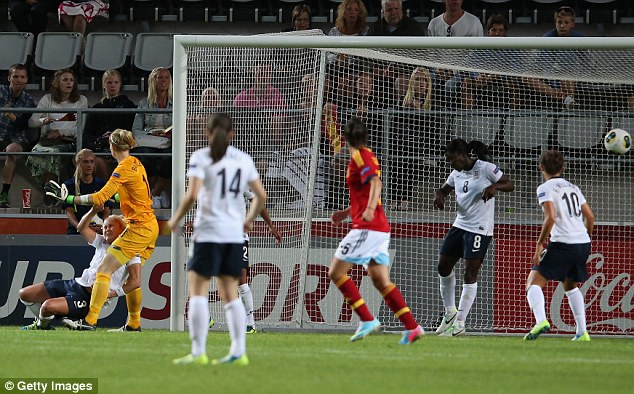 Spain started off the game in an unfamiliar 4-2-2-2 not seen commonly in mainstream soccer.  As Spain maintained possession, they were moving the ball constantly in their back four. All four of their fullbacks were equipped with hitting pinpoint passes directly to the forwards and drove the ball forward. What often occurred during this game was Spain’s usage of triangles to build the ball out of the back. Because Spain switched the field so often when in their defensive third, it usually resulted in them keeping the ball for extended periods of time. This time allowed both the attacking and defensive midfielders to make runs and check in and out through the middle. Spain’s most common type of attack through the middle was using a midfielder to form a triangle with an outside back and another player. If Spain wanted to continue to maintain possession, this other player would be a center back, and the ball could be knocked around until the triangled was pressured to move or the ball could be played through to a forward making a run down the sideline. Especially in the second half, this was a crucial part in the Spanish attack. Balls down both the right and left side, but primarily the left, lead to many dangerous opportunities and a goal in the last minute of the game. Sonia Bermudez was a huge part of this type of attack and would be the primary distributor from the wings.

Up top, Spain were very lethal because of their unique formation. Along with both defensive and attacking midfielders adding flexibility and movement in the middle, both Boquete and Hermoso dropped back into the center of the field very frequently to receive the ball. Both of these strikers also created triangles further up the field with a midfielder, who had taken the position of a winger, and a central player. These types of triangles and flexibility on the wings allowed for balls to be played over the top from defensive areas up the sideline. Runs into wide areas were able to happen and get onto these types of balls, because any player in a midfield or forward position had the flexibility to do so.

Although a 4-2-2-2 was very beneficial in getting the ball up field into dangerous aspects. The formation left large gaps which allowed England to make penetrating balls through the middle of the field. Spain were often caught too narrow, or too far up the field to track back far enough, which resulted in an England center midfielders to make a line breaking pass to basically knock out an entire line of pressure. This happened very often, most notably in the first goal scored by England early in the first half. Adding on, Spain also kept a very narrow defense. This meant that with the pace on the wings of Aluko and Yankey, the Spanish outside backs were outrun. A major problem that inflicted upon this 2013 Spanish side is the amount of people pressing the ball at once. A lot of the time, a Spanish midfielder will not look over their shoulder to cut off pases, or figure out where the ball is going to go next. This again led to a lot of balls being driven up the wings and crossed into dangerous areas. 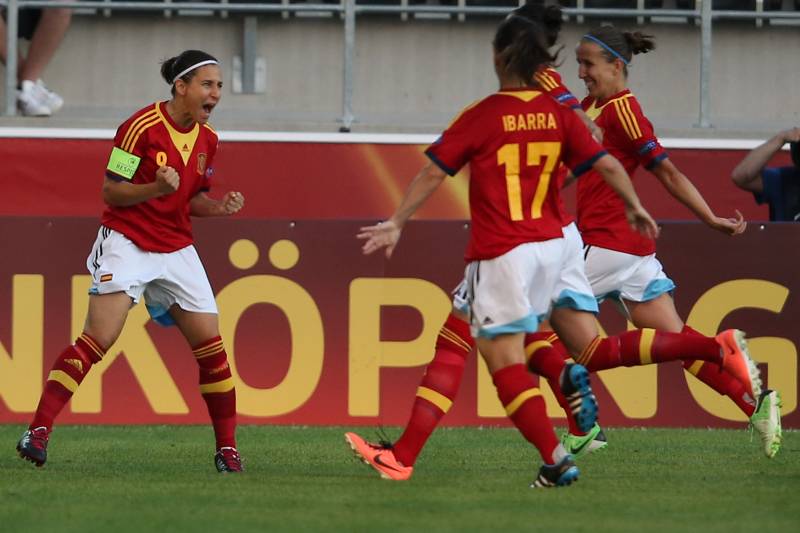 It’s hard to go an entire article without mentioning the dominance of Verónica Boquete within the 2013 Spanish squad. She was the heart and soul of the team, and set the tone for the entire game. There were points where it looked like she was the only one working, and you could see her desperation to get another goal and to win for her teams. She made runs in and around the box that confused the English defense, and allowed her teammates to drift into dangerous positions. Her movement off of the ball set up other players, and she was the key to success for all three of their goals, whether she was directly involved or not. If Spain had a player like her now to partner with the expert technical skill of Jenni Hermoso, they could easily be the best team in the world. 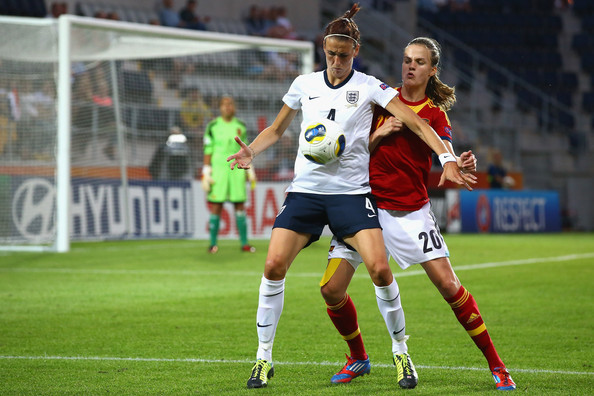 England, unlike Spain, played in the recognisable 4-2-3-1. This gave them both defensive cover on the wings, and also a lot of people in the middle of the field. Because Spain were so possession oriented and did not like to play through the middle as much, England modified slightly as the game went on to adapt to this. England could start their attack from anywhere on the pitch and were very good at keeping possession in the midfield, whereas Spain definitely preferred to play out of the back. When England would win the ball, they would only use width on one side of the field. This allowed for them to switch the ball easily using long balls in the air over the midfield. It also meant that England forced Spain into the middle to press, which meant that they could play balls through the midfield and up the wings.

England played relatively narrowly aside from their midfield wingers, Aluko and Yankey, but in most scenarios, this actually worked in England’s favor. These two players both possess a lot of pace on the wings and could easily play crosses, or the more popular option, redistribute balls through the middle. After the ball was put into a dangerous area in the middle of the field, England were immediately in a dangerous position. This was where England was at their most comfortable. When an attacking center midfielder (or striker in the case of Ellen White who drops back in a lot) received the ball, England could shoot on goal or put the ball back through to a winger who was making a run through the middle. The main example of this is when Aluko received the ball from a center midfielder to have a shot on goal. These balls broke apart Spain’s defense very well because they exploited one of Spain’s weaknesses which is marking outside runs into the middle. These balls are crucial to England’s attack because they cut out a large portion of the Spanish defense in one pass. 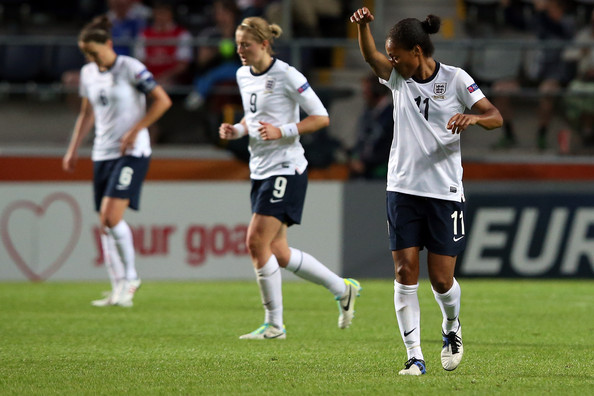 England defended the wide areas a lot better than Spain, though still struggled when Spain played combinations through the middle and made triangles. When Putellas came on for Bermudez, this problem became even more prevalent. These types of triangles would put one of England’s outside backs in a 1 versus 2 or 1 versus 3 situation (Or a 1 versus 1 where the England fullback would just plainly be outrun on a long ball), which allowed Spain to get dangerous crosses into the middle of the field. Because England would spread themselves out on the side of possession, on transition Spain liked to exploit their weak side. Luckily for them, Spain was not a quick transition team, as they preferred to maintain possession, so this did not happen as often. Another factor that helped England, was the fact that both Aluko and Yankey took their duty as midfielders in stride. Even as traditionally attacking players, both took their responsibilities of tracking back to defend very seriously. A lot of the attack could also be fed through the outside backs. Both outside backs for England, especially Alex Scott, would become part of the attack and provide outside options once Aluko and Yankey made runs inside.