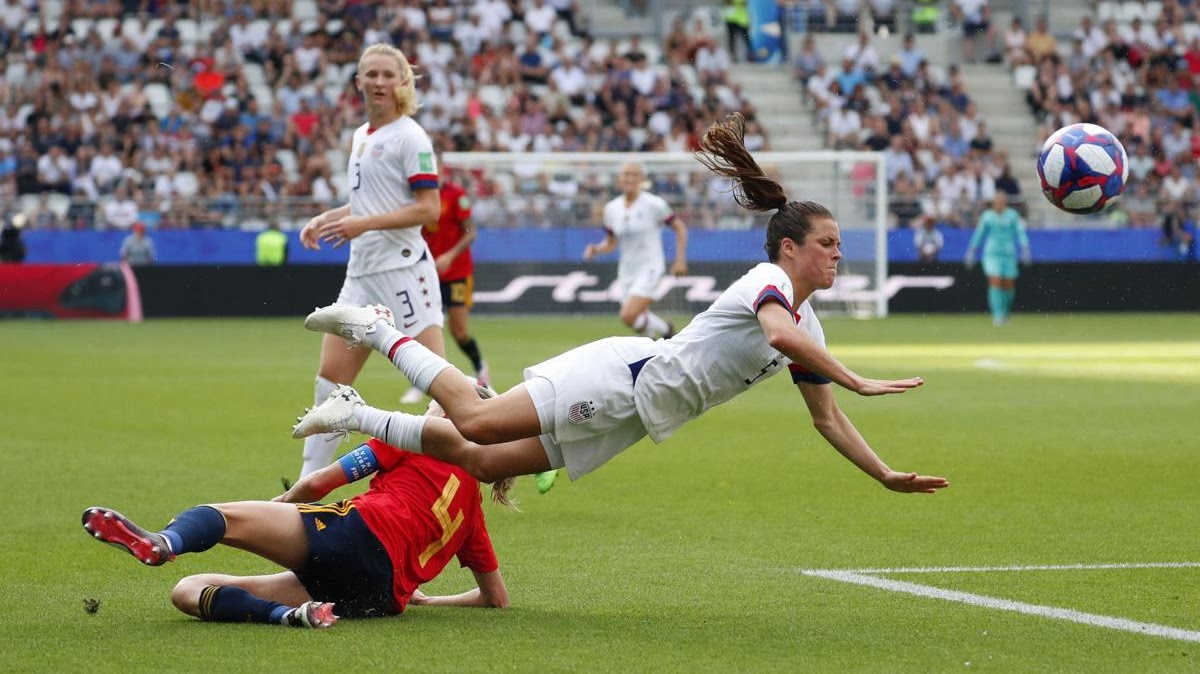 Spain has made a name for themselves in the world of women’s football despite being ranked 13 in standings by FIFA. They have lost to the United States twice in the past ten months, both times pushing the reigning champions to their wits end and forcing them into winning by a one goal margin each time. So how did they do it? How did they put themselves in a position to compete with the best in the world? This article will go through the ins and outs of the Spanish style of play and personnel and will teach you just what it means to play a distinctive, possession based style. 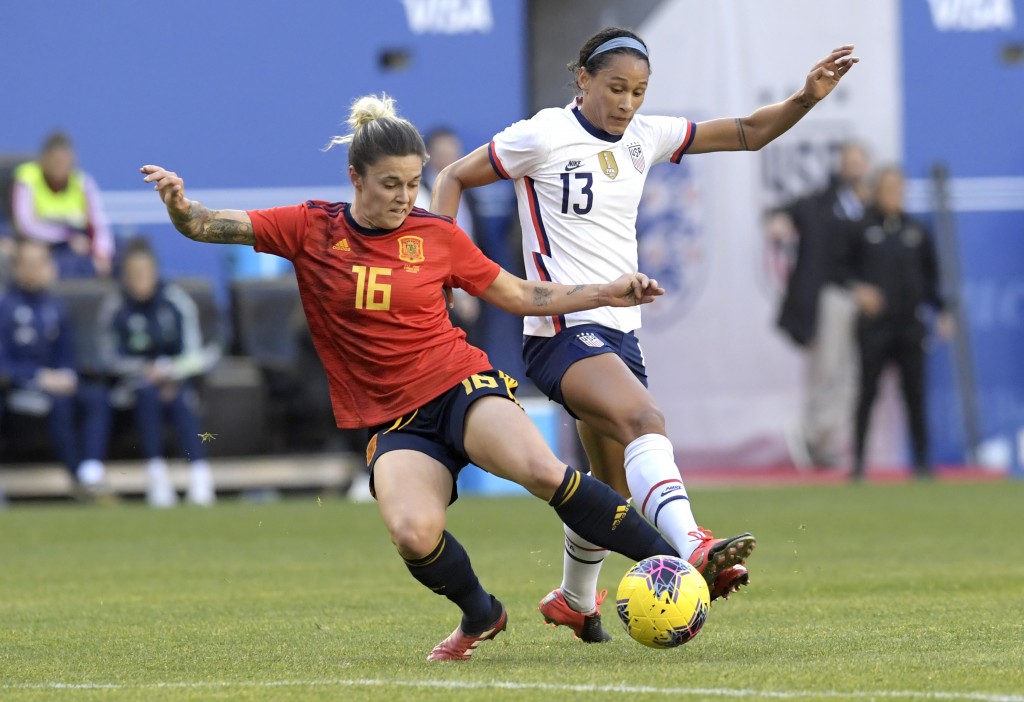 The defensive structure Spain has used the past few years has truly been their bread and butter when it comes to challenging the best in the world. They use the traditional four back, with all four of the players being used, liking to get up and into the midfield to start the attack. The center back pairing often seen within this Spanish side is Irene Paredes and Mapi León. Both of these players are highly technical and fit the Spanish style of play to perfection. When defending in the box, both players are highly physical, pushing and shoving to make sure that they get to the ball first, or so that they can continue to maintain position. What is particularly interesting about Spain, is that their first priority is to maintain position. This means that if either León or Paredes win the ball, their first thought is never to clear the ball, even when they are playing around attackers in their own box. The center back pair almost never give the ball away, even if it means using some 1 vs.1 skills to dribble around players in their own defensive third. Another amazing attribute the Spanish defense possesses is making excellent slide tackles. León in particular is known for her last minute, perfectly timed slides to win the ball from opposition usually on a dangerous breakaway. An example of this was in the most recent She Believes Cup match when the United States played Spain and León slide tackled Press right outside her own box. This resulted in a controversial winning goal, but an excellent tackle nonetheless.

Spain’s defense is also known for their excellent long range passing out of the back. It is common to see Spain passing along their back four or using short spurts of passing within their midfield to try and play out of the back. All the Spanish center backs in recent years are very equipt at driving the ball themselves up to the midfield to pick out passes with attacking center mids or forwards. Since Spain’s defensive line is very attacking minded, this results in Spain playing with a very high line. This high line can leave large gaps behind the defense for opposition to play through, both in the air and splits in the defense. However, Spain has become very aware of this in recent months and are usually fast enough to cover. 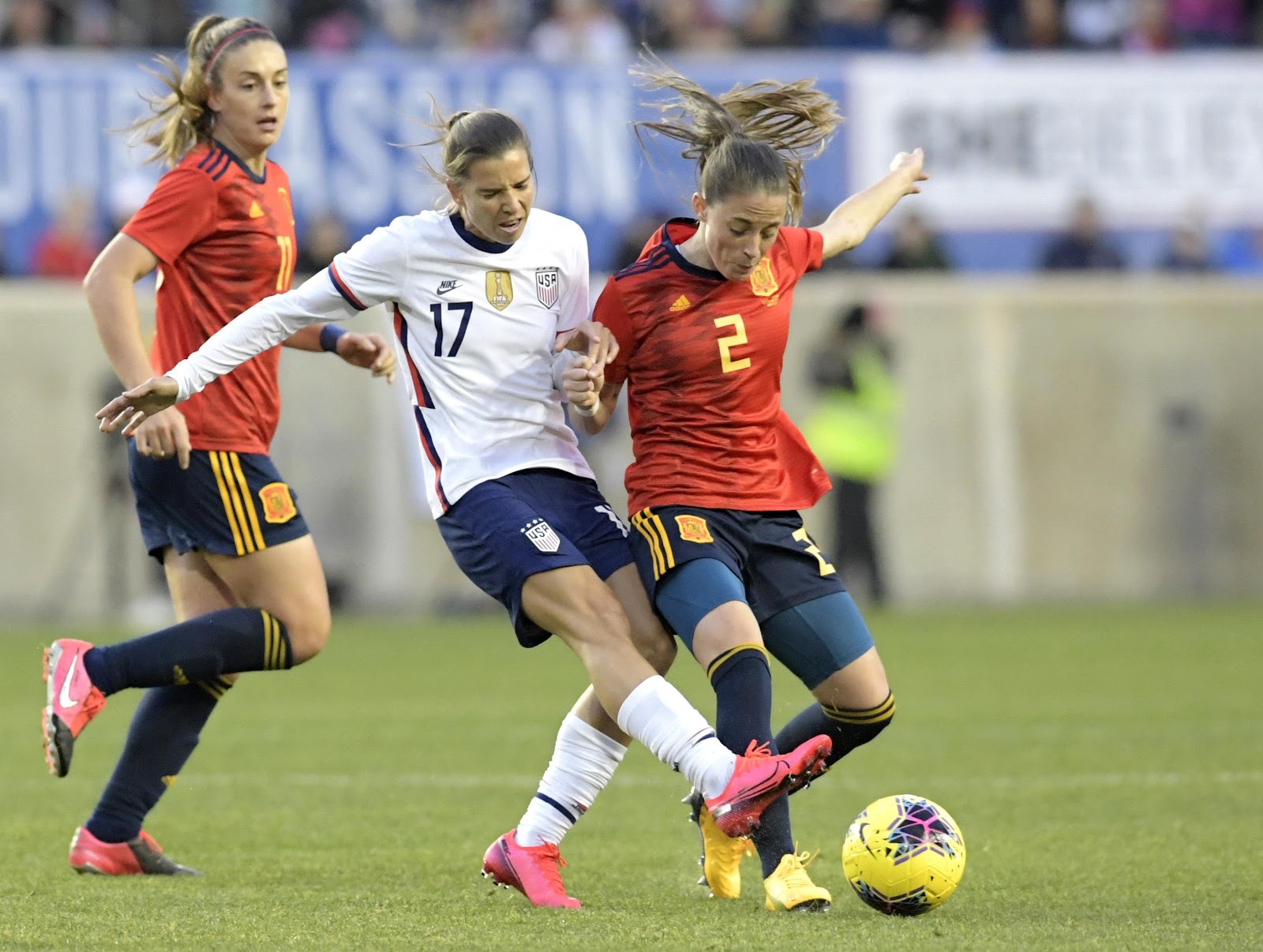 Adding on to Spain’s defensive high line, outside fullbacks are also very much a part of the attack. Spain, unlike most other teams, pride themselves on having brilliant, attacking minded fullbacks who are comfortable on the ball. In Spanish club sides like Barcelona, the outside back position has one of the best, if not the best, depth in the squad, not to mention that these outside backs are not converted wingers. In both the World Cup matches, and those played last month in the 2020 edition of the She Believes Cup, outside backs were the sole distributors of the ball up the flanks, and excellent at crossing and making overlapping runs in the final third. Again in the Supercopa Final, Barcelona’s outside back Marta Torrejón scored an unlikely four goals in their 10-1 thrashing of Real Sociodad after combining numerous times with wingers and midfielders such as Caroline Graham Hansen, Alexia Putellas, and Lieke Martens. Torrejón is the perfect example of what it means to be a Spanish outside back with her streaking runs in behind and abilities to cross on the ball. As seen in the goals usually conceded by Spain and their club teams, the issue with this tactic is that sometimes their fullbacks go too far up the field and are beaten on transition or long runs down the sideline. Sure, many of them are very wary of this and have immense speed, but it can leave the wings very open for teams who like to penetrate using width. In order to cover long balls when the outside backs are trapped up field, a center back usually comes over to block the cross. This rarely works, so if a team is very good at scoring off of outside crosses or aerial crosses, Spain tends to struggle. This is virtually unavoidable unless a major formation switch were to happen. This is very unlikely to happen however, as it is the basis for the Spanish attack which, at times, can be very lethal. Overall the ability to maintain position, relieve pressure, and make line breaking passes allow the defense

to be the backbone of this Spanish side. 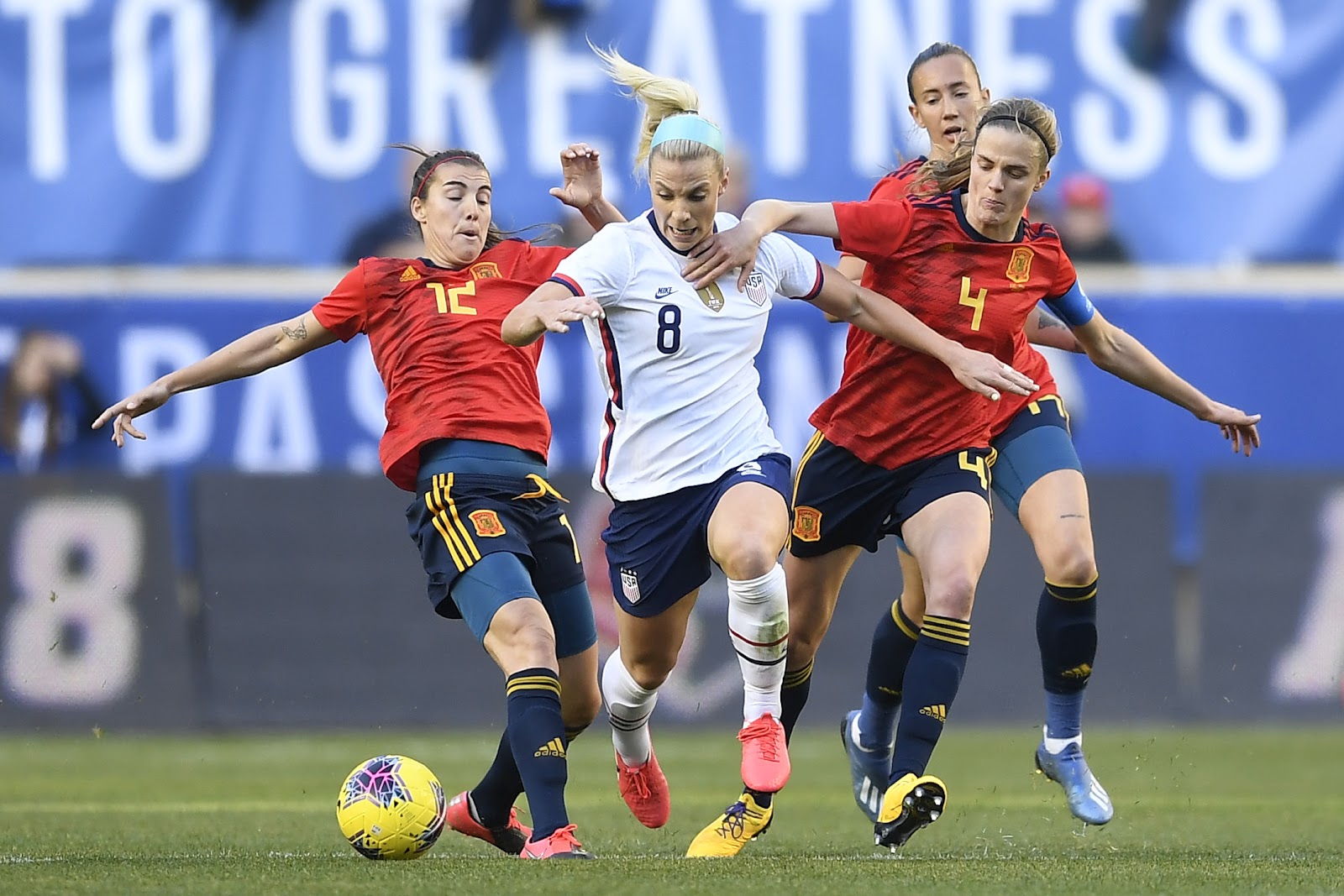 After losing the midfield battle to the United States in the Women’s World Cup last summer, Spain decided for a different approach. Spain, in the round of 16, had set up in a 4-3-3, the same formation the United States have basically patented since their World Cup campaign started. Needless to say, this did not go according to plan for Spain, and their usual possession based style of football was taken away from them. For the She Believes Cup however, things turned out differently. Spain set up in a 4-2-3-1, with Alexia Putellas regaining her spot as the primary midfield playmaker on the field, while Virginia Torrecilla and Patri Guijarro dropped back into wider defensive midfield roles outside of the two center backs. Guijarro and Torrecilla were usually not as much a part of the attack, but since they were in a wider position, they could defend for the outside backs who liked to push up higher down the wings. This left the center midfield completely open for whatever Spain wanted to do since Spain held the majority of possession. Since Spain likes to push their center backs into the midfield, they were able to do this and allow either León or Paredes to become defensive midfielders. This also allowed the center back pair to distribute the ball to Putellas up top. Putellas did not have to worry about taking anyone’s space when checking in to receive the ball, but also had enough space to switch in and out of that central striker role with Hermoso at will. Putellas became the primary playmaker in this game, passing the ball around with ease and at a high pace that no one could match. The United States never fully got used to playing around the lack of Spanish midfield, as the ball was never in the direct center of the field, where Lavelle, Mewis, and Ertz like to keep possession and build. There were moments when Mewis was all the way over on the left sideline to get her share of the ball because she was never getting it through the middle. A large issue found with this formation is that when a United States player finds themselves in the middle of the field when they have won possession, the Spanish defenders and midfielders tend to collapse around the player in order to get possession back and restart. This however leaves a lot of United States players open behind or on the wings. This again leads to a lot of crosses or long runs by wingers which Spain have a hard time defending against. 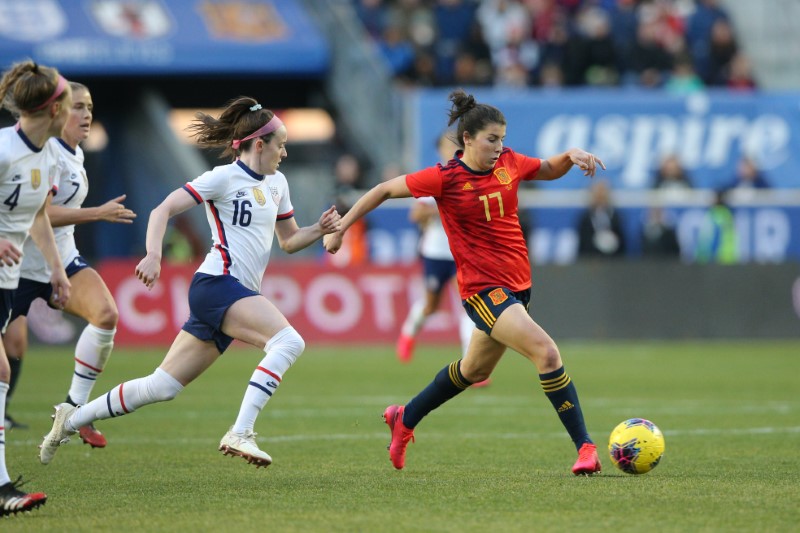 Spain had also made some changes within their front three, or four in the case of the She Believes Cup. Jenni Hermoso is key to the Spanish attack with tricky technical skill and the ability to shoot with finesse. It might seem contradictory that a striker who enjoys becoming a playmaker for others and positioning herself as a false nine would be left alone up top, but this really worked in Spain’s favor. By allowing Putellas to sit behind Hermoso, the two Barcelona attackers can switch back and forth with each other depending on the situation. Either player has the ability to finish on net, or receive and distribute. In terms of the wingers, their time on the ball mostly comes from having many combination plays with Hermoso or Putellas, or any outside back who are making runs up the flanks. Both García and Cardona can play centrally and generally shift through to the middle numerous times a game depending on the flow. They both possess pace and a mindset to drive towards goal and work very well with allowing central players to make runs in and around the box and outside backs to push forward.

In total, Spain has improved massively in the past few years. They understand the runs that are being made, the gaps created for passes, and everyone on the field seems almost in sinc to everyone else. Spain has a beautiful style of football that is highly skilled and technical. Their ability to maintain position no matter the circumstance is what makes them able to build their attack and become the deadly force they are known to be up front. This is what allows Spain to challenge the best team in the world.