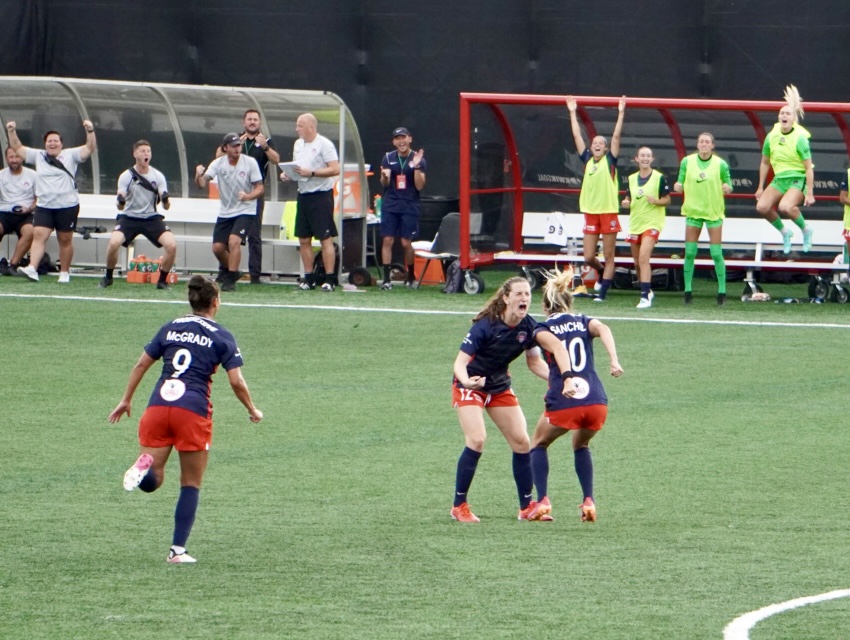 After the Washington Spirit’s emphatic 2-0 win over the North Carolina Courage last week at Audi Field, the Spirit were back at Segra for a tough opponent. The last time Gotham FC had conceded more than one goal was in September of last year, a mighty feat for a team in the NWSL. This matchup would be interesting regardless of the craziness that ensued. 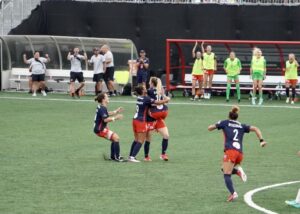 First Half: The chaos started with a questionable red card offense for Washington Spirit defender Sam Staab in the seventh minute. This left the Spirit with ten players on the pitch, and without their starting center-back. Against the run of play, the Spirit managed to grab the first goal of the match. Andi Sullivan lofted a perfect pass into the stride of Trinity Rodman, who blazed by the Gotham defense and whipped the ball inside the far post. Gotham struck back, scoring two goals in a 15 minute period off of corner kicks.

Second Half: A foul at the top of the 18-yard box set up the perfect opportunity for a Spirit player to turn the match around. Ashley Sanchez did just that. Sanchez bent a perfect free kick around the Gotham wall and inside the near post to make the score level at 2-2. Around twenty minutes later, Gotham crushed Washington hearts with their third goal of the night. Ifeoma Onumonu laced a cross into the box for Midge Purce who slotted the ball home past Aubrey Bledsoe. 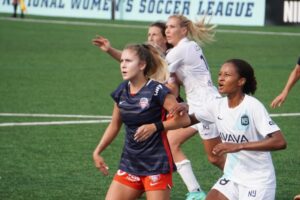 Due to the absence of Tori Huster through injury and Julia Roddar to the Olympics, the Spirit opted to play a 4-3-3. This formation allowed Dorian Bailey attacking room in the midfield while Andi Sullivan would be the singular pivot in front of the back line. A 4-3-3 would allow the Spirit’s attacking minded fullbacks the ability to push into the midfield and overlap the wide forwards. With Andi Sullivan dropping back between her center backs, the Spirit’s formation would become a 3-4-3 in possession. This formation gives way to overloads in wider areas and flexibility going forward.

Although the intent was positive, the lack of familiarity with the formation and the positions that came along with it led to openings within the back line. With both fullbacks too far up the field and Andi Sullivan holding a defensive midfield role, too much pressure was put on the Spirit’s center-backs Sam Staab and Paige Nielsen. This resulted in a red card for Staab, corrupting the Spirit’s game plan.

Needless to say, the Washington Spirit struggled to cope with one less player on the pitch. This was especially prevalent in wider areas. The Spirit took a 4-3-2 formation with ten players, providing limited width in attacking areas apart from wide runs and counter attacks. This meant that Spirit outside backs Teagan McGrady and Anna Heilferty were left to defend an entire sideline with little to no help up front.

Gotham FC are a team that rely on their forwards to create scoring opportunities. Although this may seem obvious, many teams build through their midfield to get the ball into dangerous positions. The New York/New Jersey side are renowned for having some of the most rapid forwards in the league. Midge Purce, a United States international who can play both outside back and outside forward to a world-class level, is one of them. Both Purce and her compatriots Ifeoma Onumonu and Nahomi Kawasumi ate up the wide space they were given and subsequently provided countless crosses into the Spirit 18-yard box. The Spirit often cleared the ball behind their own net, allowing Gotham to claim several corners.

Gotham scored two of their goals off of corners and one directly off of a cross. 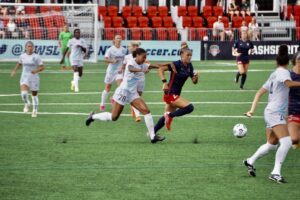 The Spirit were unable to be possession-based due to a lack of players and Gotham’s high press. Despite their usual game-plan of using both possession and counter attacks as a way to beat opposition, the Spirit exclusively used the latter with ease.

Once the Spirit regained possession, they would either switch the point of attack through their midfield or play over Gotham’s line of pressure. The Spirit attacking line made runs into wider areas to receive these passes over the top. This gave room for one of their fullbacks to overlap a forward, or for the forward to create passing triangles on the sideline. Even though this was only possible through transition-based play, the Spirit managed to create goal-scoring opportunities without completely exposing their back line.

An excellent example of this counter-attacking style is Trinity Rodman’s goal in the twelfth minute. In the lead up to Rodman’s goal, Andi Sullivan received the ball in the middle of her own half. As Gotham were returning to their defensive positions, Sullivan launched the ball into Rodman’s path down the left side of the field. Rodman beat two defenders with ease before launching the ball into the Gotham goal-mouth.

With the United States Women’s National Team and eleven other teams away for the Olympics, the league table in the NWSL will change. For the Washington Spirit however, Kelley O’Hara, Emily Sonnet, Julia Roddar, and Saori Takarada are immense assets, though not the core of this technical squad. With youth talent, work ethic, and passion the Spirit will surely be a team to watch out for in the coming weeks.