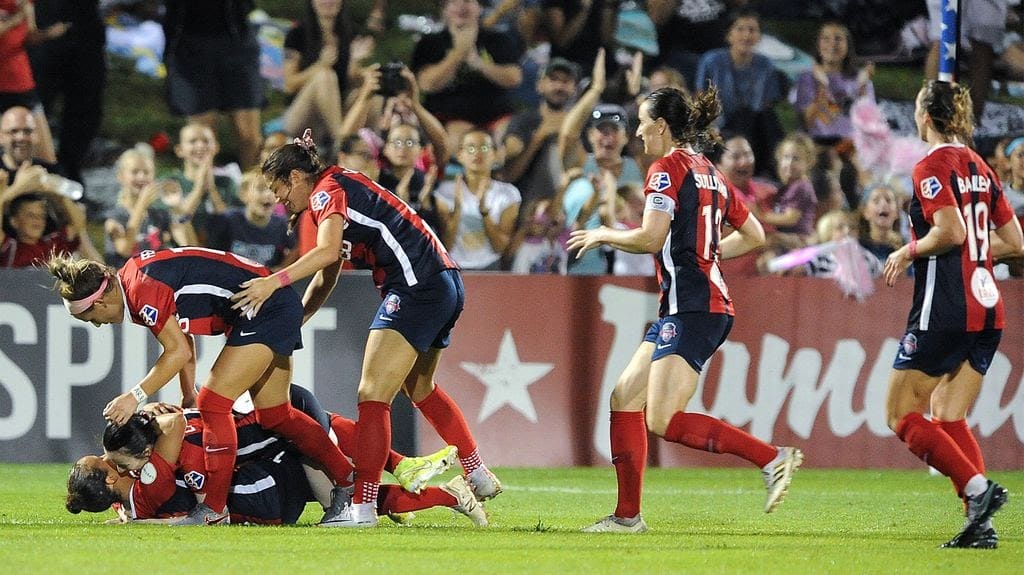 North Carolina Courage have been in command of the top slot in the National Women’s Soccer League (NWSL) the past few seasons, fighting for the NWSL shield for the fourth year running, and competing to be top of the table for a third consecutive season. The Washington Spirit, were not as much of a title contender in recent years, but with a bright young squad still on the rise, games are always interesting between these two teams. In past meetings, North Carolina always seemed to come out with the upper hand, with their side chocked full of international talent. But if you add Rose Lavelle into the mix for the Spirit, brilliant things seem to occur.

GAME RECAP: The first half started off shaky for Washington, who conceded multiple corners before the clock had even reached the two minute mark. As the half continued to progress, Spirit’s defense started to hunker down and become more aware of who they needed to mark on runs into the box. This awareness even extended as far as an overhead kicked clearance from Paige Neilsen to retain the draw. It wasn’t until stoppage time in the first half when the Courage were able to break through off of a late run from Lynn Williams, did they finally go ahead. The early stages of the second half seemed to be going according to plan for North Carolina. Although goals were not scored, McDonald, Dunn, and Williams remained dangerous up top with killer speed and excellent pressing ability. As the half continued to make headway however, the Spirit had different ideas. Following a tackle won against a North Carolina forward, Mallory Pugh slotted the ball past Labbé for the home side’s first goal of the night. The Spirit would ride this momentum all the way to the final whistle with Rose Lavelle’s spectacular individual efforts giving the Washington team the go ahead goal in the 84th minute. 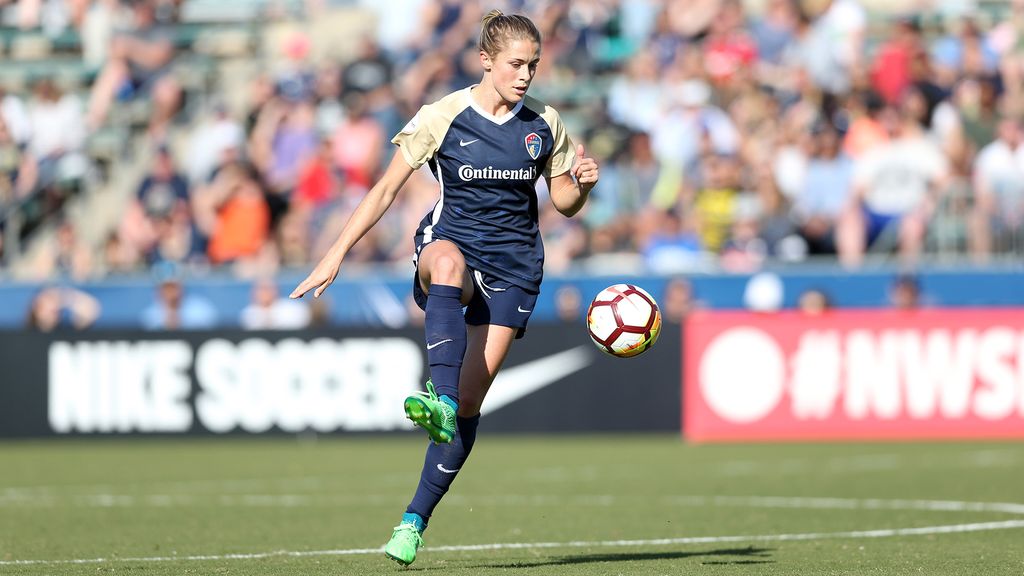 Like most American teams, the North Carolina Courage play a conventional 4-3-3 with an attack-minded and wide set defensive line. The Courage also played a very high line, which helped move play forward and permitted outside backs to join into the attack. In the first half specifically, the Spirit launched the ball down towards their final third to get their attacking players upfield. Because of North Carolina’s higher positioning, this enabled them to quickly regain possession and start the attack over. This in turn gave North Carolina’s center backs a large number of options for distributing the ball, and allowed passes to be more accurate, as they were already close enough to properly start the offensive onslaught. As seen throughout the United States’s recent international campaigns, Abby Dahlkemper was already an expert at long balls and therefore, the Courage had utilized this skill to their full advantage. Although this strategy did stretch North Carolina’s defense farther than most teams would feel comfortable, the Courage were able to maintain possession and stay preventative of counter attacks. This was possible for two main reasons, the first being that Washington’s style of play was not one to exploit other teams with speedy counter attacks, and the second being that their entire defense was made up of world class players.

North Carolina’s main method of attack came from using wide areas, trusting in the runs of their outside backs and outside forwards. Because of the excellent defensive distribution, these fullbacks were normally found streaking down the wings on attack, or making overlapping runs around a forward player. The balls played to these outside backs when they are farther up the pitch were usually aerial balls, or driven balls if the outside back decided to stay back and help out the center backs. Once an outside back received the ball, their first thought, generally, had to do with going forward. If they could not drive an attack themselves, they aimed to put their outside wingers in a position where they could do the same. These fullbacks may even have found themselves crossing the ball into the box for a winger to get on the end of or making overlapping runs to make combinations in their attacking third of the field. This, in total, made up the majority of attacks by the Courage. 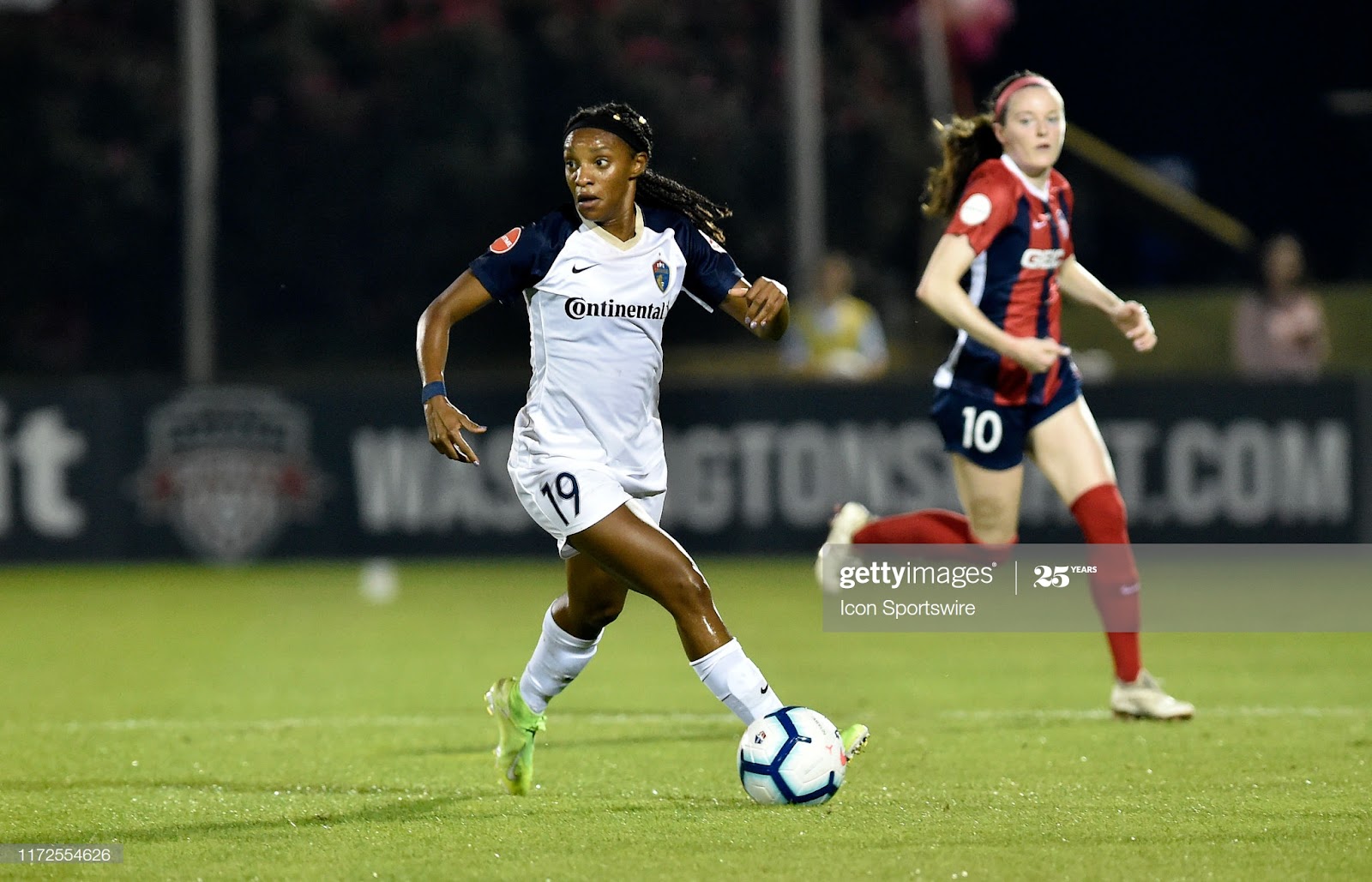 Because most of North Carolina’s attack came from the wider areas of the field, the main job of the center midfielders was to play out wide. This usually came in the form of short passing spurts throughout the middle of the field before launching the ball out wide to start the attack.

The North Carolina attack was one of the most effective in the entire NWSL in the 2019 season. Their forwards knew how to put immense pressure on the defense they were playing against, in this case the Washington Spirit, and would not allow them to play out of the back or through the middle of the field. This gave the forwards chances to win the ball high up the field and quickly place a counter attack on the opposition. As discussed when talking about North Carolina’s defense, outside players and attacking width were pivotal in the style of play the Courage liked to use. Outside backs and forward wingers played numerous combinations throughout the game, making overlapping runs and crossing the ball into the box. This was hard for the Spirit to defend as the Spirit preferred to play through the middle and build out of the back. Another aspect to this tricky attack is the personnel the Courage had to fill into these roles. With the speed of Williams and Dunn on the wings and the control and physicality of McDonald in the middle, their attacks were bound to be fatal to Washington. This, in no relevance to the score of the game, is exactly what happened throughout the North Carolina attack. Williams made a late run into the box to receive a header from a player crossing out wide for North Carolina’s only goal, and the Courage hit the woodwork on four different occasions before ultimately losing the game after not capitalizing on any of these chances. Williams, McDonald, and Dunn showed creative play, passing, and technical work between the three of them that could not have gone unnoticed while watching this game. Dunn in particular stood out with her workrate and technique in both shooting and dribbling around defenders. 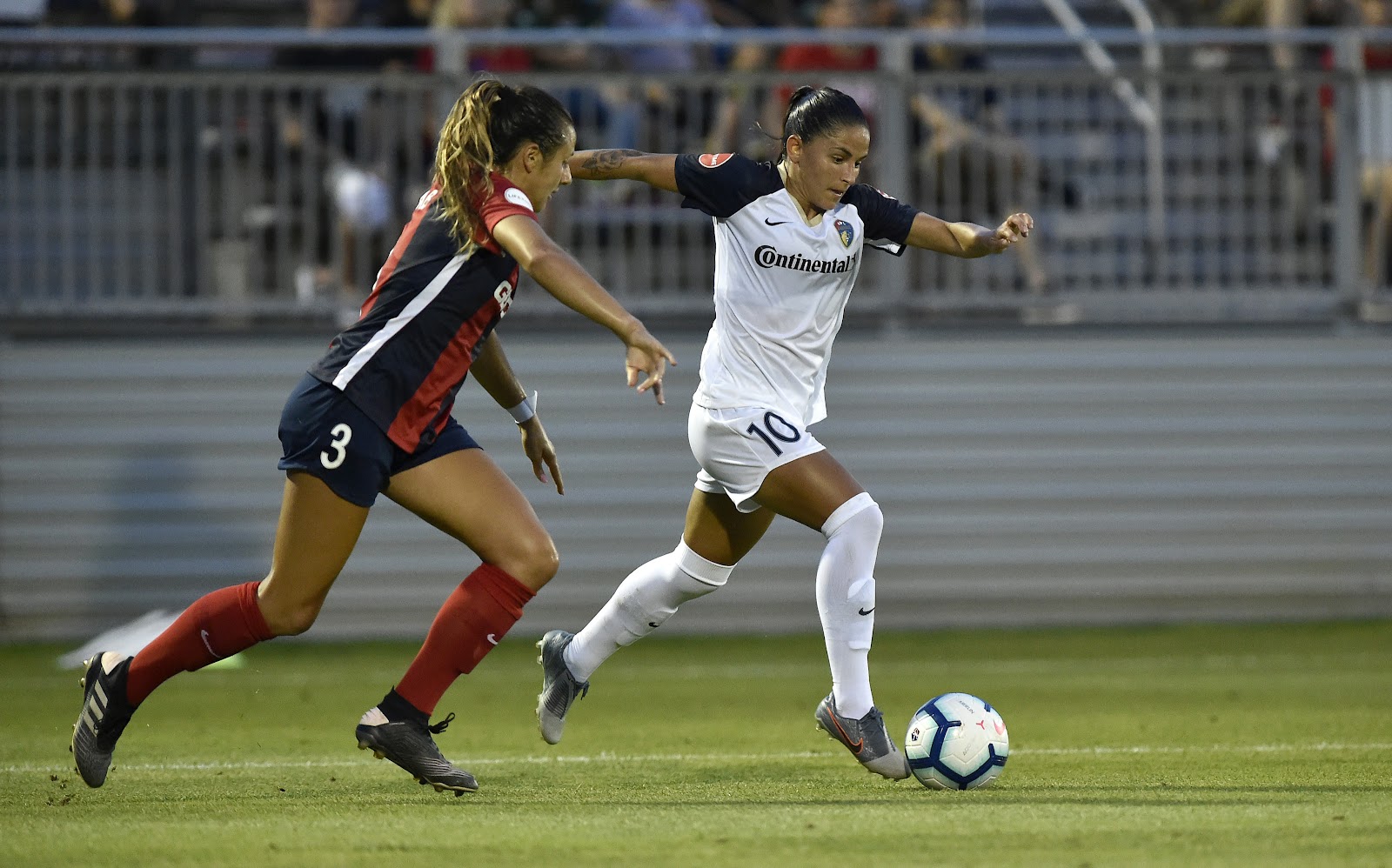 Much like the Courage, the Washington Spirit also played a 4-3-3, keeping up with the American themes of domination and a traditional set up. The Spirit looked slightly shell shocked in the first minutes of the game, as said before, conceding two corners before the two minute mark. Clearing the ball seemed to be at the forefront of thoughts held by the Spirit defenders, allowing North Carolina the time and space to drive down the wings and force Spirit players to manmark and defend from inside. As the first half progressed, Washington’s defense figured out how to mark and anticipate passes into the box. This type of anticipation and defensive pressing allowed the Spirit to block crosses and shots made by the Courage from the wings. The Spirit throughout the entirety of the first three quarters of the game stayed very compact, somehow forcing the Courage to stay out of their net for most of the time, blocking shots from various Courage attackers left and right.

Another huge part of the Spirit’s defensive success came from their goalkeeper, Aubrey Bledsoe. Not only did Bledsoe make excellent saves and bold runs out of her net to stop Courage forwards, but she also made sure that everything on the field was under control. She dominated the defensive line, making sure that people were marked and calmly suggested different methods to approach the game when things were not working. These are the things, in short, that showed what it took to become NWSL keeper of the year. 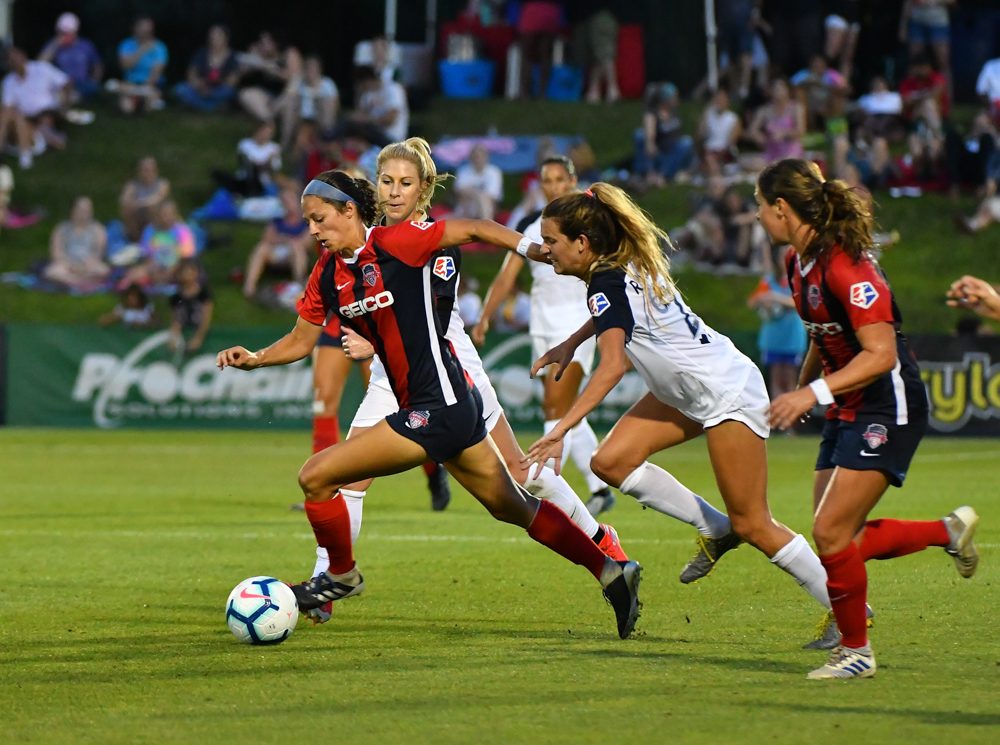 During the second half of the game, the Spirit changed their plan around to have a bit more width in more advanced positions. This meant that Washington could use their style of play, building through the middle, while forcing the Courage to make more runs towards the inside of the pitch to find space. This also meant that the Spirit were able to capitalize on their attacking options in the center of the field. With Rose Lavelle and Andi Sullivan in the center of the field, creativity was already taken care of. Lavelle is an expert at weaving in and out of players and finding through balls towards both center and outside forwards. When the Spirit started to find Lavelle more in the second half, things really started to turn in their favor. Even though the Courage were burning as hot as ever, still managing to hit the crossbar and the left post, the Spirit were able to keep the ball for longer periods of time, and play the way they like to play. Most often, Washington would start their attack in the center of the field and then attempt to draw defenders in and kick the ball wide. This allowed wider players the chance to slip into the attack and have options to dribble or pass back into the middle going forward. The best example of this was shown during the Spirit’s first goal when a player in the center of the field dribbled up into the attacking third before slipping the ball to Mallory Pugh for her to have an easy finish into the net. Washington were a very technically capable team, so when they did gain possession in the middle of the field, the ball moved from player to player very fast and a lot of dribbling was used. This is similar to many European sides who like to create triangles to pass the ball around and keep possession.

Overall, this game is highly recommended to soccer fans who love to watch women’s soccer on an international stage. It had top ten players in the world competing to find their way to club championships, the American style, and home grown talent not seen anywhere else in the world. This game was the epitome of what it means to support soccer in America.