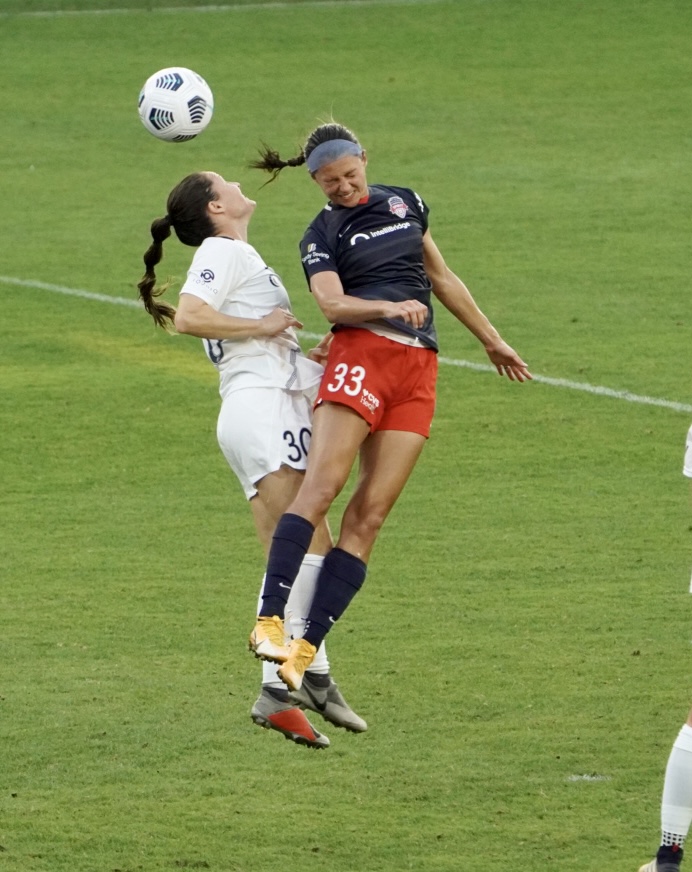 Games against the North Carolina Courage are always a challenge. With speedy forwards, a flexible box midfield, and powerful defenders, it is no wonder why the Courage have continued with their winning ways into the 2021 season. However, the Washington Spirit are a capable side in their own right. With three competent box-to-box midfielders and a plethora of defensive talent, Lynn Williams barely touched the ball the entire match.

This match was one of tactics and nullification. Long range shooting and lofty passes over the midfield lines produced the best opportunities of the match. When the Spirit switched tactics to use wider areas of the field, many chances were fired at both ends.

As Dorian Bailey stated in her post-match interview, there’s a bit of an “east coast rivalry” when the Washington Spirit play the North Carolina Courage.

First Half: For the first fifteen minutes, the Washington Spirit pressed the North Carolina Courage into uncharacteristic mistakes. Less than three minutes into the match, Andi Sullivan played the ball from her own half into the stride of Ashley Hatch. Hatch attempted to chip Casey Murphy, but only forced the keeper into an easy save. The Courage found their first opportunity through the set-piece service of Brazil’s Debinha. This would be the catalyst for a spell of North Carolina dominance. The Spirit held strong, and both Trinity Rodman and Dorian Bailey grabbed opportunities that missed the target.

Second Half: The second 45 proved to be far more eventful than the first. North Carolina kicked the half off with a flurry of opportunities, each forcing an easy save from Aubrey Bledsoe.  Shortly before Julia Roddar’s introduction to the match, Sanchez forced a wondrous save out of Casey Murphy. She followed it up minutes later by hitting the post.

In a similar event to Hatch’s chipped shot in the first half, a Courage defender played a lofted pass into the Spirit’s defensive third. Debinha arrived first, clattering into Bledsoe before the ball could reach the net. For North Carolina’s next opportunity it was Debinha’s turn to be the creator. Her chipped ball to Jessica McDonald was saved by Bledsoe.

Throughout the remainder of the half, the Spirit were on top. This is in part due to the addition of Julia Roddar at left-back. In her first since the Olympics, Roddar provided the spark for an entertaining final half-hour. After Hatch’s near-miss over the crossbar, Roddar dribbled down the left sideline, turning a defender so badly that she fell over. Her shot was pushed wide by Murphy. 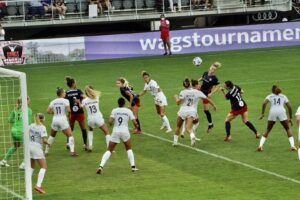 Throughout the better part of the match, the Spirit played a conventional 4-3-3. Despite their usually attacking minded fullbacks, the Spirit barricaded the sidelines to prevent Lynn Williams and Amy Rodriguez from penetrating. Williams was double-marked by Paige Neilsen and Emily Sonnet to nullify her impact on the game. On the other side, Kelley O’Hara was given space to maneuver. North Carolina plays a box midfield, sometimes known as a 4-2-2-2. They positioned one of their four midfielders on the side of Lynn Williams to provide an overlapping threat and defensive cover.

North Carolina’s other three midfielders pinched central. This allows the Courage to utilize their technical, pacey central players to break down the Spirit before releasing either Williams or Rodriguez out wide. However, the Washington Spirit did not give any room for this type of on-field dominance to occur. The Spirit played a central three of Andi Sullivan, Dorian Bailey, and Tori Huster, all of whom can play multiple midfield positions. Flexible marking and positional rotation was key to prevent the dangerous attacking threats of Debinha and Denise O’Sullivan.

In addition, because North Carolina leaves no winger open on the side across from Lynn Williams, Kelley O’Hara and the entire front line had a field day in wide areas. Rodman, Sanchez, and Hatch created numerous opportunities by catching the Courage fullbacks higher up the field. When Roddar came on, the Spirit implemented a tactical switch. Washington focused on overloading wider areas to outnumber North Carolina. 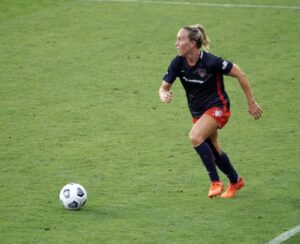 Throughout the majority of the match, the Spirit forward-line played a counter-attacking style. Trinity Rodman, Ashley Hatch, and Ashley Sanchez interchanged positions to overload wide areas. Rodman created numerous opportunities on the wings, using her speed and strength to blow by the North Carolina defense.

Different from the Spirit’s typical possession-based attack, their rapid, free-flowing runs caught North Carolina off-guard for the first fifteen minutes. As the game progressed, each side began to implement tactics to stifle the opposition. This led to a less entertaining match for the average fan, with limited opportunities on net. All of this changed when Julia Roddar was subbed onto the field at left-back. For Sweden, her national team, Roddar is a known commodity in the fullback position. However, Roddar is played primarily as a midfielder for the Washington Spirit. Fans are left shaking their heads as to why this is the case after her performance on Sunday evening.

Roddar was the catalyst for an open match on both ends. Because the Spirit pushed their midfielders wide, North Carolina struggled. Roddar, Sanchez, and Hatch each had opportunities deriving from wider areas. Although worth the risk, the opposing effect on overloading wide areas was the uninhabited space in the center of the field. The Courage found themselves with room to maneuver, causing the Spirit several scares with their line-breaking passes.