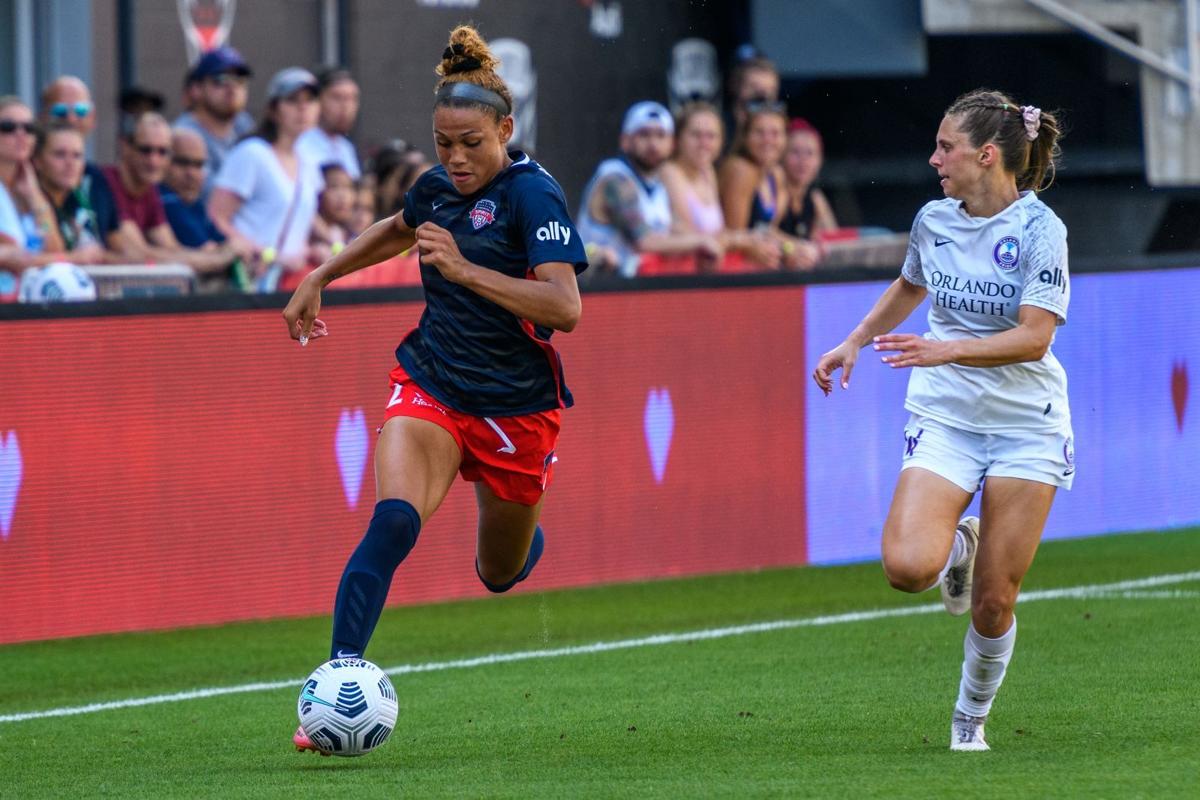 Last week’s Washington Spirit vs. the Orlando Pride was an early season top-of-the-table matchup. Both teams enjoy a plethora of international veterans and home-grown talent. Each is led by an English-born manager who boasts teams with some of the best technicians in the game.

FIRST HALF: Kicking things off for the Spirit with a moment of brilliance, Trinity Rodman spun the defender at midfield before driving to the end line. Her cross was skewed wide by Ashley Hatch. Minutes later, it was Ashley Sanchez catching the Pride off guard after an excellent ball by Rodman. The cross bobbled for a few moments before it found Julia Roddar at the top of the area. Roddar’s ball went flying off over the net after ricocheting off the crossbar. It wasn’t all Spirit dominance however. After an uncharacteristic mistake from Andi Sullivan, Alex Morgan laced a shot straight at Aubrey Bledsoe for Orlando’s best chance of the half.

SECOND HALF: The second half was more lively on both ends. Kelley O’Hara started off the second half with a point to prove after a tussle with Brazilian legend Marta that left her on the ground for a concerning period of time. After receiving the ball on the left wing, O’Hara drove into the center of the field, getting off a powerful strike that grazed the top of the goal. In the 64th minute, O’Hara floated in a cross for Ashley Hatch who nodded home her third goal of the season. Three minutes later, the Orlando Pride struck back. Aubrey Bledsoe threw the ball into the center of the field before Marta volleyed it back towards the Spirit net. After two touches, Taylor Kornieck had found the bottom corner of the Spirit goal. The final half hour was hectic. Each side put in a massive shift to win the three points. Despite eight minutes of stoppage time, neither team was able to break the deadlock. 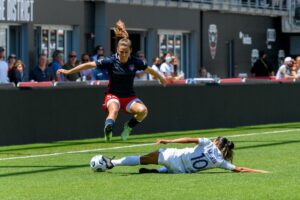 Apart from their first match of the season, the Washington Spirit has consistently stacked up in a 4-2-3-1 formation. Per usual, the Spirit did not play with strict positions. As long as players are aware of open space around them, manager Richie Burke allows for positional rotation. Especially in the case of the fullbacks, Kelley O’Hara (and, to an extent, Tori Huster) are attacking-minded. They give pace and experience to the forward lines. Emily Sonnet is another prime example of an attacking-minded defender. Naturally, Sonnet is not able to push up as much as the fullbacks due to her pivotal center-back role.

Playing with two holding midfielders maximizes the attacking nature of the Spirit back line. At points throughout the match, the Spirit formed a 3-5-2 with Andi Sullivan dropping back between the two center-backs. This released O’Hara and Huster on the wings. When this formational shift occurs, Julia Roddar is left as the singular pivot in the center of the field while Rodman and Sanchez Sanchez can play a free-flowing attacking midfield role.

If O’Hara decides to push up alone, the Spirit can play a 4-4-2 by dropping Andi Sullivan into the right-back role. Because Huster is no longer in an attacking fullback role, Rodman overtakes the space in front of Sullivan. This gives cover to the United States international as well as security to return to the midfield to play out of the back or break up play. The Spirit then shifted the back line to the left to cover for O’Hara. As seen in both the first and second halves, the best chances from the Spirit came as a result of O’Hara pushing further up the pitch and the flexibility of the midfield lines. 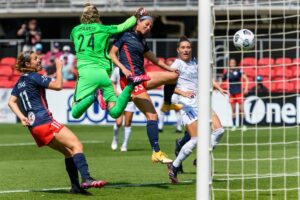 Like any flexible formation, problems arise when players are not used to their role on the pitch. Andi Sullivan’s composure and mature style of play ground the midfield and the Spirit’s ability to keep possession moving forward. Roddar did a good job of handling this responsibility for the larger part of the match if Sullivan dropped into the back line. Nevertheless, the Spirit found themselves with a larger gap between their midfield and defense when Roddar was taken off the field.

Richie Burke’s formation switch was unpredictable for Orlando Pride in the Spirit’s attacking third of the field, but left Sullivan and the center-back duo of Emily Sonnett and Sam Staab exposed at the back. If Sonnett, O’Hara, or Huster decided to push further up the field, Andi Sullivan would cover. This left no holding midfielder to stop Orlando’s counter-attacks and no outlet pass for the Spirit to progress and keep play through the center of the field. Regardless of this formational change, the Spirit prefer to play using longer balls, mainly across-field passes. This allows the Spirit to switch their point of attack quickly, catching their opposition off guard. Possession through the center of the field does not play a major role in how the Spirit break down opponents and enforce their game-plan. 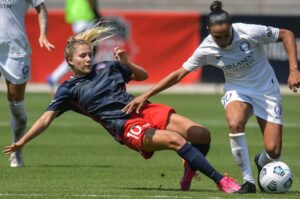 Further up the pitch, Ashley Sanchez and Trinity Rodman were an extension of the backline’s flexibility. Although Sanchez, Rodman, and Tara McKeown were positioned behind Ashley Hatch, all three rotated to fill whatever space was needed. Sanchez and Rodman in particular interchanged positions countless times throughout the match. This interchange allowed the Spirit to exploit space in wider areas using overlapping runs and checking into pockets to receive the ball.

If Kelley O’Hara and Tori Huster pushed up, Rodman and McKeown pinched inwards, occupying the space of an attacking midfielder. This freed up Sanchez to pick up the ball in deeper areas. Rodman and Sanchez switched roles when needed, though Rodman was more likely to receive the ball in wider areas. Because the Spirit were not looking to keep possession through the middle third, both Sanchez and Rodman were crucial to advancing play. Their dribbling skills, pace, and vision allowed them to play a ball into space or drive the ball towards the goal. Having players drop back into deeper midfield areas also allowed for defensive security. With Andi Sullivan dropping into the back line to allow O’Hara and Huster to get forward, this left Julia Roddar as the only central pivot. Both Sanchez and Rodman relieved the pressure placed on Roddar in this role.

Even though Hatch is listed as the loan striker on paper, the Spirit always had numbers in attack. Even if either Rodman or Sanchez dropped into deeper areas, the Spirit were making runs and there was space to play the ball into wide areas. A multitude of players in the box were crucial when the Spirit were looking to play the ball from out wide. Along with Hatch, weak side runs and late runs into the box were prevalent among the Spirit midfield. A variety of crossing was another major aspect to the Spirit attack. Both outside backs preferred to cross from wider areas, playing the ball in the air. Rodman and Sanchez preferred to beat Orlando’s defenders, cutting the ball back from the end line.

Heading into the game against the Chicago Red Stars, the Spirit are ranked third. A win for the Red Stars could see the Spirit fall behind in the title race. However, the NWSL is just a month into the season. Anything can happen. The Red Stars are coming off of a massive win against the North Carolina Courage, with Morgan Gautrat in her best form since her international breakthrough. The Spirit will be looking to catapult themselves into a higher position on the table. Based on recent form, the Spirit are slight favorites. With a youthful lineup still finding their feet in the professional sphere, opponents should fear the technical and physical ability of this Washington D.C. side.