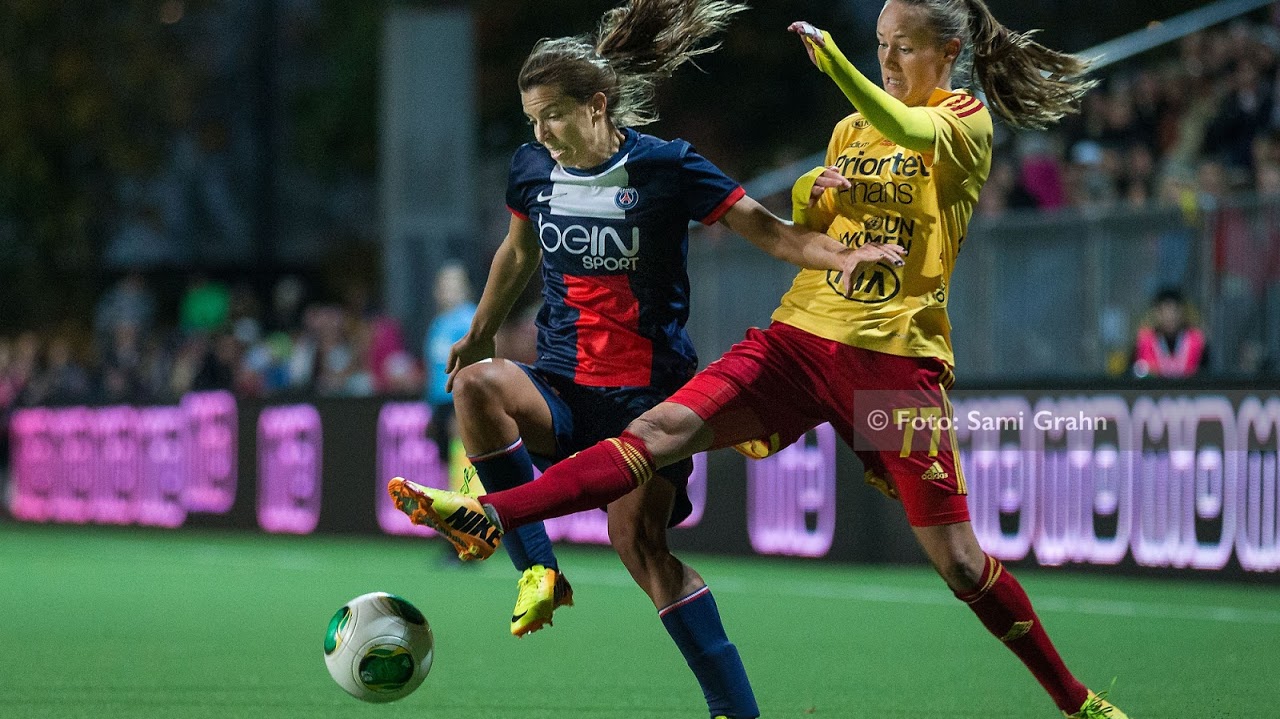 You may hear the best teams in women’s soccer and a few names may come to the top of your mind. Currently, Barcelona women, or Barcelona Femení as they are called, are flying, making it to the Champions League final and being crowned league champions in the past few weeks. The infamous Olympique Lyonnais of France are the next obvious choice, winning the league for the 14th season in a row and winning the Champions League title a record six times in their sixteen year history. Wolfsburg may even come to mind as well, with an excellent German squad being at the top of the world for a number of years now. You may be asking yourself, what’s the point in mentioning these teams? Well, besides being the best teams in the world, they each have something else in common. Over the past few years they have either had a current or notable former player who has played for a team called Tyresö FF. The Swedish side has had a rocky history, with two notable stunts into the top tear of Swedish soccer before finally collapsing into economic downfall in the middle of the 2014 season. Throughout the mid 1990’s, American greats such as Kristine Lilly, Michelle Akers, and Julie Foudy all played for the legendary Swedish side, pushing them to the highest position they would achieve for a while. Almost two decades later, the team was back to its winning ways, with perhaps one of the greatest teams in history. 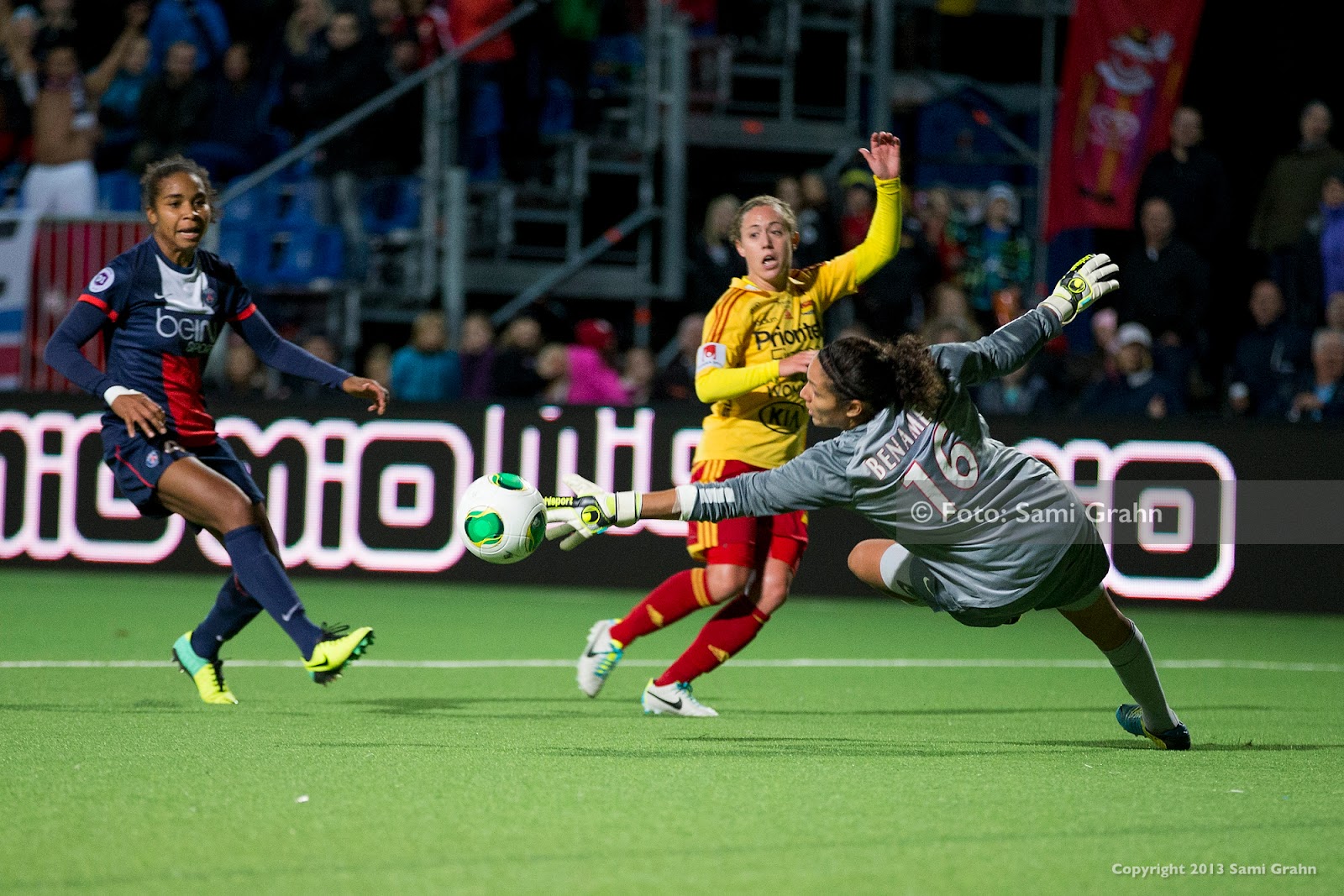 To reach a Champions League final, a team has to be almost extraordinary, especially with the level of competition faced along the way (even as a team in 2013/14). What better way to make a powerhouse team than to have a roster stacked of powerhouse players? The 2015 World Cup winning American contingent played a huge part in allowing Tyresö to advance to the top of the teams in Europe, even if the team would ultimately dismantle a year later due to serious financial issues. For context, Tyresö had some of the best players in the world in their starting defense, with Whiten Engen, Ali Kreiger, and Linda Sembrant to name a few. Tyresö played their games using a traditional four-back, with a higher line and fullbacks who were crucial in stepping up and joining in the attack. Continuing on with the American style of play, long balls were a very popular method of starting the attack for Tyresö. These balls can be played out in a number of ways, including lengthy aerial balls down the sideline for a wide positioned attacking midfielder to chase onto, or a driven pass directly to the feet of a higher attacking midfielder. Additionally, balls directly from the central defense will happen and will be chipped overhead or passed low and hard to a midfielder in either a wide or central area. Because so much running and 1 versus 1 skills are used by these wide midfielders, overlapping runs from outside backs are a large part in continuing Tyresö’s attack. A notable example of this is in the UEFA Champions League 2013 edition match between Paris Saint-Germain and Tyresö FF. Shortly before the 65th minute mark, Megan Klingenburg, an American outside back, pressed far up the field to create struggles for the PSG defensive line. She ended up winning the ball high up the field and the outside midfielder at the time drifted inwards towards the middle to allow Klingenburg to bolt down the sideline. This ended up resulting in a game winning goal, though many more less impactful examples exist in the archives that can be found from Tyresö that season.

Outside Midfielders and Forwards 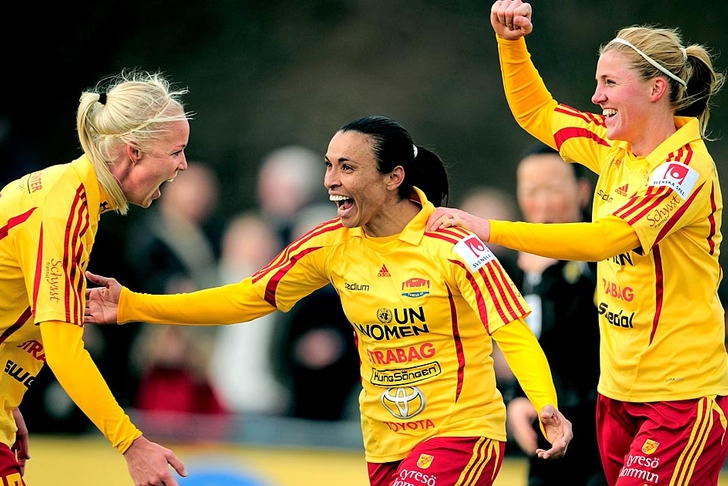 As often seen when discussing Tyresö’s defensive line, the Swedish side love to use long balls out of the back. For many teams, this can cause all sorts of problems from not having options going forward to the other team repeatedly gaining possession. These problems however, were not of issue to Tyresö. With players like Dutch winger Kirsten van de Ven, the infamous Marta, and new up-and-comer Caroline Graham Hansen, controlling long balls and taking on defenders 1 versus 1, was made easy. In fact, many of these players seemed to enjoy these aspects of the attack and would capitalize and play off of their pace and extreme technical skill. In a team where both Graham Hansen and Jenni Hermoso can be used as subs, it’s no surprise that this strategy worked most of the time. Just like in the American style of play, the immediate response from a wide player was to go forward. If this were not able to happen, or a long ball was not able to be found, Tyresö would use their second plan of building through the midfield. As an opposing team you might be wondering if Tyresö’s attacking variations ever stop. The simple answer is no, because there were so many ways this European side would manipulate the ball that there were never a shortage of options. 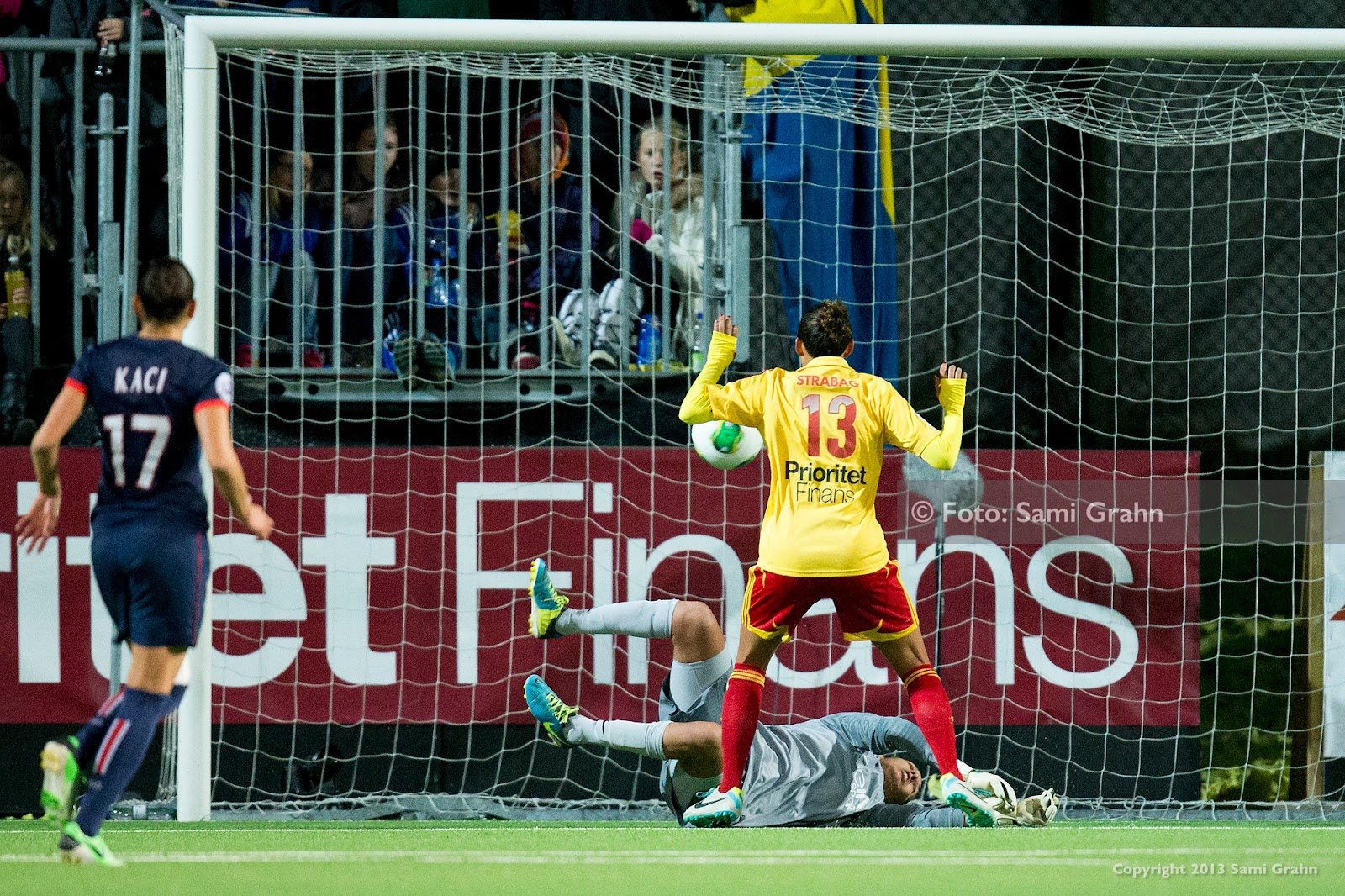 In the midfield, Tyresö were stacked. Caroline Seger, the residential Sweden trickster, would play a large role in maintaining possession in the opposing third of the field while trying to distribute the ball back and forth from the people in front of her and distribute balls to wide areas. Spanish legend Veronica Boquete, known as Vero, would play just ahead of Seger and made a practically unstoppable duo with Marta up front. The two of them would play off of each other’s runs and were never afraid to challenge a defender in individual battles. Individually, Vero was highly equipped at making slicing runs through the middle. This usually resulted in the ball being cleverly slipped through to a wide player making a run inside or cross the ball, or to a center forward up top. Vero also possesses a lethal free kick which was unleashed a few times in Tyresö’s game against Fortuna Hjørring. Just when it is thought that this team could not have gotten any better, Christen Press was put up top to the icing on the cake. Press was the leading scorer that year in the Damallsvenskan with an impressive 23 goals to match her United States jersey number. As the world has seen in recent years, Press is an all around phenomenal player. The American forward is pacy, confident, and technically skilled enough to shrug off defenders and launch the ball into the top corner of the net. Press has a knowledge of the game and other teammates to be able to make runs in and around the other team’s box, get on the end of crosses, and chase chipped balls over the top. This style almost mimics that of the United States National Team where Press has been shown to be unbeatable in front of the net and weaving through opposition. 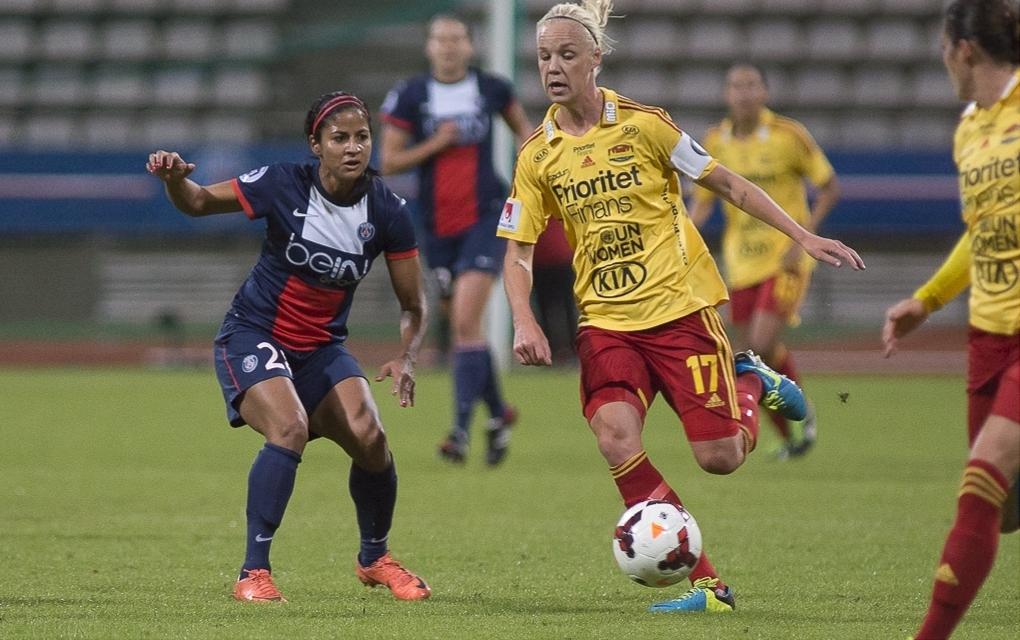 In contingence with Tyresö’s American styled attack, Tyresö’s outside backs were a crucial part in defensive solidity. Even though the fullbacks were vital in making overlapping runs and added to the danger Tyresö’s forwards possessed, these defenders were just as quick to track back on defense. Especially apparent in games against tougher opponents such as PSG, these outside backs were excellent at stopping crosses and preventing forward movement down the wings. Decision making was also a stongsuit of these defenders, and knowing when to go join the attack and when to stay back was an essential skill to possess in the Tyresö roster. This is very similar to the American styled fullbacks seen today within teams like the United States National team and other skilled European sides.

Even though Tyresö’s defense was solid in many more areas than one, central defense and central midfield defending were large reasons that Tyresö demonstrated challenges in their game against PSG. Notably, Tyresö struggled with clearing the ball and winning back possession at the top of their own box. This is in part due to the fact that Tyresö played a very trusting defensive line. Like most dominant modern teams, Tyresö’s two center backs played in a pressure cover format where one would go up to press the ball, while the other would stay back. This allowed the center backs to be able to find those overhead passes and distribute directly to wide offensive forwards. This also created problems however when long balls were used against Tyresö or they were caught off guard by a slicing ball through the middle of the field from the other team. The other part of this issue that Tyresö faced was lack of defensive cover in the midfield. In their Champions League match against Paris Saint-Germain, Caroline Seger pressed very high into the midfield. This gave Vero Boquete less time and space on the ball, and exposed Tyresö’s midfield to more defensive issues. Against Fortuna Hjørring however, this was changed. Seger sat father back into the defensive line, and Vero was allowed to roam about the final third and look to dribble and cut in and out of players as she prefers to do.

In total, Tyresö was one of the most exciting teams ever to play in the world of women’s sports. An American styled play, with a bench full of superstar players to choose from could not be more enjoyable to watch. Between the pace and movement of Klingenberg and Kreiger in outside back, and the excitement of Vero and Seger in the center, this team was certainly one to watch out for. Who knows what madness could have ensued if the stars aligned in Tyresö’s favor?