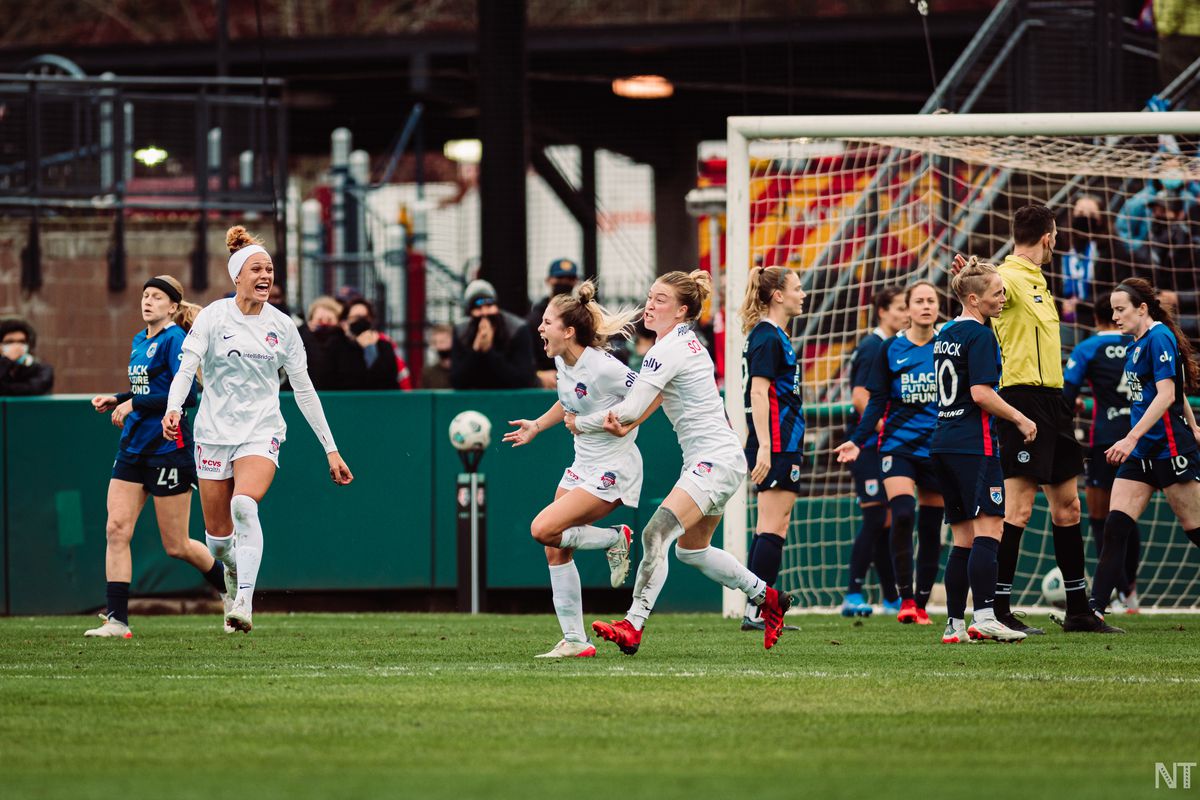 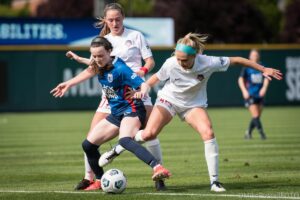 In Sunday’s semi-final, the OL Reign kicked off ready to wreak havoc. Megan Rapinoe’s one time ball into the path of Eugenie Le Sommer created the fastest goal in NWSL playoff history. OL Reign continued to pelt the Spirit with pressure in the opening ten minutes, culminating in Rapinoe’s effort just wide of the far post.

Trinity Rodman turned things around for Washington in the twelfth minute. A one time volley off of Sam Staab’s assist enabled the Spirit to find their fight. Both Eugenie Le Sommer and Tara McKeown found opportunities to pull their side ahead, but the score remained level going into half time.

Dzenifer Marozsán continued to be a driving force for the Reign in the second half. After receiving the ball at the edge of the box, she dished a pass to Rapinoe who’s effort soared wide. Ashley Sanchez was another standout. Her spectacularly chipped ball to the back post curled into the net to put the score at 2-1.

OL Reign tried desperately to claw back a goal. Their efforts were denied by the Spirit’s back line. Emily Sonnett’s ability to read an attacker’s movement is the reason the Spirit advance to the final this Saturday in Louisville. 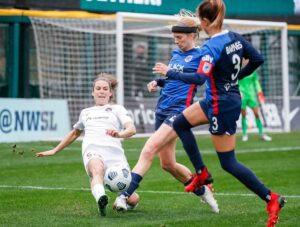 The task of playing all the talent on the OL Reign roster at once is nothing short of heroic. Laura Harvey has come as close as one can get. By playing Sofia Huerta as an outside back and Dzenifer Marozsán as a center forward, Harvey has succumbed to flexibility and fluidity as her method of success. Luckily, this strategy has made OL Reign one of the most lethal forces in the NWSL.

Although their fluid movement is nothing short of magical, it is the high press that brings security to their back line. The Reign played a 4-2-2 formation, with a diamond midfield with two wide forwards. Quinn was the anchor of the diamond. Rose Lavelle, Jess Fishlock, and Dzenifer Marozsán occupied midfield roles further up-field. When a Spirit center back had the ball, Jess Fishlock would rotate to become a double pivot with Quinn. Lavelle and Marozsán remained farther up-field.

Either Marozsán or Lavelle would initiate the high press, forcing the Spirit center back to play a certain direction. If Marozsán initiated the press, Lavelle would mark the defensive midfielder, while Le Sommer and Rapinoe would mark the outside pass. Now, the Spirit’s only option would be to play long, resulting in a high turnover rate so the Reign could enact their counter-attack.

Unsurprisingly, the key to OL Reign’s counter was Dzenifer Marozsán. Marozsán set up the Reign’s only goal of the night, placing the ball into space for Rapinoe to make a one time pass to Eugenie Le Sommer. The next best opportunity for the Reign was a lob by Le Sommer at the end of the first half. This was also set up by Marozsán. Rapinoe was set up again by the German playmaker at the edge of the box in the second half. Unfortunately for the Reign, their missed chances cost them the game. 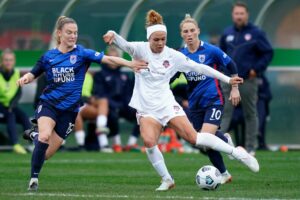 ​The technical and visionary skill of the Washington Spirit is the best in the NWSL. Ashley Sanchez and Trinity Rodman break down opposition by individual skill and speed. These types of players make the Spirit the perfect candidates to pick apart the high press of OL Reign.

Trinity Rodman was an outlet in the first half in both wide and central areas. Dorian Bailey and Ashley Sanchez also found space in the middle of the field. Once the ball was launched, the Spirit would create passing triangles around the OL Reign outside backs. Pockets of space opened up behind the Reign’s defensive line, allowing Ashley Hatch and Rodman further room to maneuver.

Furthermore, the Spirit back line is renowned for accurate long balls. Sam Staab’s assist to Trinity Rodman illustrates this point. Rodman’s goal against the Reign was strikingly similar to her winner against Houston two weeks prior.

The true difference maker for the Spirit was Emily Sonnett. Even though she is a longtime member of the USWNT, Sonnett rarely receives the plaudits she deserves at club level. Her countless blocks and perfect positioning against the Reign forwards secured the Spirit victory.

The Washington Spirit are no longer the up-and-comers. Despite their age, the wealth of experience and knowledge of the game have made them undefeated under new manager Kris Ward. Ashley Sanchez, Andi Sullivan, Emily Sonnett, and Ashley Hatch have been called up to the USWNT roster for their games against Australia later this month. Trinity Rodman was also selected but declined her spot.

Aubrey Bledsoe stated in the post match press conference that she believes it is fate for the Spirit to be in this final. Now all they have to do is win.